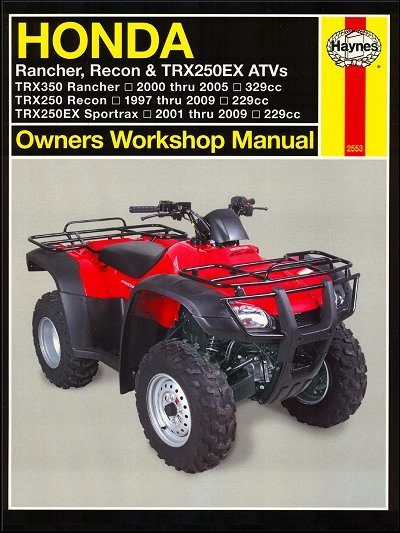 Once you have found all the identification numbers, record them for reference when buying parts. Since the manufacturers change specifications, parts and vendors (companies that manufacture various components on the machine), providing the ID numbers is the only way to be reasonably sure that you are buying the correct parts.

Whenever possible, take the worn part to the dealer so direct comparison with the new component can be made. Along the trail from the manufacturer to the parts shelf, there are numerous places that the part can end up with the wrong number or be listed incorrectly.

The two places to purchase new parts for your vehicle - the accessory store and the franchised dealer - differ in the type of parts they carry.

Used parts can be obtained for roughly half the price of new ones, but you can't always be sure of what you're getting. Once again, take your worn part to the wrecking yard for direct comparison.

kenneth lewisJanuary 31, 2021
Honda Rancher TRX350
Covered most of the items I had question about for disassemble and assemble.
Was this rating helpful to you?   👍 Yes    👎 No

duwayne hopkins verified customerMay 26, 2017
very detailed
this manual is very detailed and described the work i needed to do simply.
Was this rating helpful to you?   👍 Yes    👎 No

Sandra verified customerNovember 7, 2015
honda
Great price Thank you
Was this rating helpful to you?   👍 Yes    👎 No
Click here to review this product
(Reviews are subject to approval)
You May Also Like
Honda TRX350 Rancher, TRX250 Recon, TRX250 Sportrax ATV Repair Manual 1997-2009
$34.85
Free Shipping (US48)
In Stock
Close
Top
Close
Open