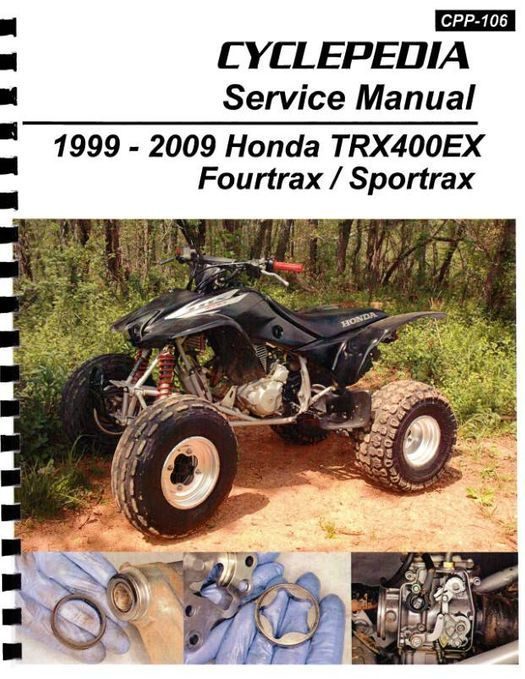 This Honda TRX400EX Sportrax / Fourtrax ATV Service Manual: 1999-2009 is a high quality service and repair manual published by Cyclepedia Press LLC. When the time comes for you to perform the various maintenance and repair tasks on your beloved sport ATV, this is the ultimate source.

For some time, the do it yourself (DIY) crowd suffered from a lack of available information. That is, until Cyclepedia stepped in to fill in that gap. They didn’t just do it half-heartedly either. These superior shop manuals contain detailed, step-by-step instructions and loads of excellent photographs, specifications and even wiring diagrams in order to assist you with projects all along the way. The procedures contained inside were all performed and authored by a veteran, Honda ATV dealer-trained technician, so you know that they are complete and accurate.

In 1999, the ATV world received a much-needed boost. After spending the decade weathering a storm of criticism against the industry regarding safety concerns and such, Honda launched the first all-new sport ATV. It was a hit! Much like their cars, these Honda machines hold a solid reputation for quality. Even so, all machines require service and repair at some point. When that time comes, be sure this handy guide is the first tool you have in hand.

The Motor Bookstore believes this Honda TRX400EX Sportrax / Fourtrax Cyclepedia DIY ATV manual is a great resource because of the following characteristics: