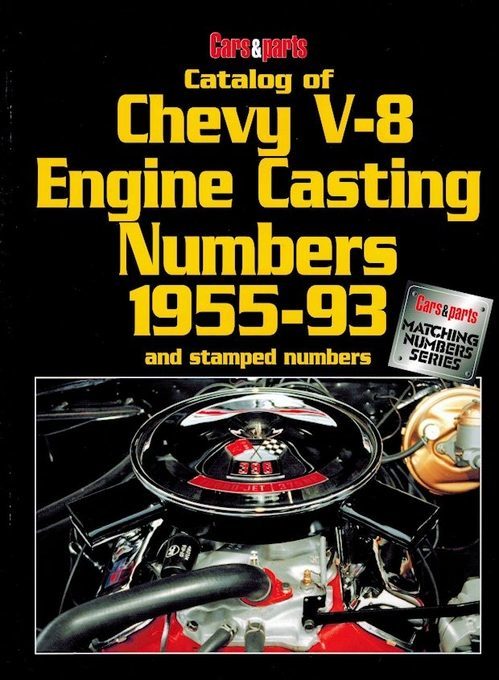 This guide allows you to identify a component by finding the casting or stamped number, then turning to the appropriate section of the book, and look it up.

Small-block Chevy heads may be the most confusing and most often misidentified of all major Chevy engine components.

The same basic head design has been used since 1955, but significant changes that are difficult to notice at first glance have been made over the years, especially difficult to see when the engine is installed in a vehicle with the valve covers in place.

Perhaps the greatest cause of confusion with small-block Chevy heads is the external "casting mark" that many people use for quick identification.

The most widely known of these is the "double hump" mark found on many different medium and high performance heads of the '60s.

Many enthusiasts mistakenly believe that every Chevy head with this mark is a scarce "fuelie" head that was originally installed on a special high-performance muscle car, such as a fuel-injected Corvette.
CRANKSHAFT

"Casting" numbers on Chevy cranks can be a bit confusing. First, while cast-iron cranks have a casting number, forged cranks have less prominent numbers that are obviously not "cast" at all.

Also confusing is the fact that you can never be sure how many digits of the number will actually appear. Many times only the last four digits are on the crank.

For example, number 3941178 crankshaft might bear the engine number, or it might have only the last four digits. And that is exactly how you will hear it described, as an "1178" crank by collectors and historians.

The casting number on a crankshaft will identify its application, but there are other features that should also be checked.

The first thing to look at is the flash or parting line on the crankshaft. A parting line appears at the point where two pieces of a mold come together.

Forged-steel crankshafts are stronger than cast-iron crankshafts and were usually used in special high-performance small-block and big-block engines prior to 1973.


Pick up the Catalog of Chevy V-8 Engine Casting Numbers 1955-1993 and stamped numbers today, so you can start saving tomorrow. The Motor Bookstore offers Fast and Free Shipping to our US48 customers and very cheap shipping to all others, especially if you purchase multiple books... James L. Kendrick verified customerMarch 6, 2017
Great Books
These books are very informative and packed with great information on the GM engines. Helps you in buying the correct parts for your classic restoration when you are trying to be year correct for your project. Will recommend these books highly. Thanks Jim Kendrick
Was this rating helpful to you?   👍 Yes    👎 No

Tony verified customerSeptember 9, 2015
Engine Casting Numbers
This book is so valuable. It helped me determine the value of some engines I inherited and will help me purchase or sell in the future.
Was this rating helpful to you?   👍 Yes    👎 No
Click here to review this product
(Reviews are subject to approval)
You May Also Like
Catalog of Chevy V-8 Engine Casting Numbers 1955-1993 and Stamped Numbers by Car & Parts Magazine
$23.95
Free Shipping (US48)
In Stock
Close
Top
Close
Open