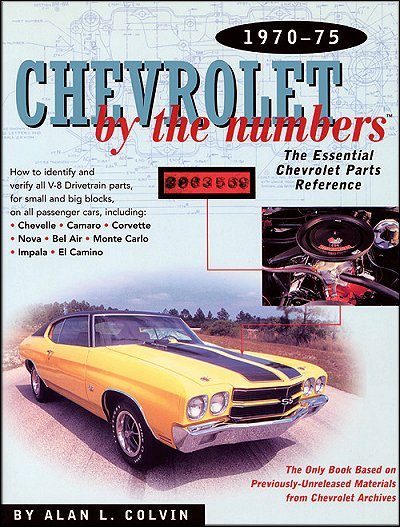 Chevrolet by the Numbers: 1970-1975, published by Bentley (1994), is the authoritative reference for identifying and verifying the correct and exact Chevrolet V8 drivetrain parts, by casting number, for your vehicle.

One of the most misused and misunderstood phrase in the restoration hobby is "numbers matching." Everyone, from those who have large collections of cars to people who have only a vague interest in the hobby, has their own interpretation of what constitutes a numbers matching car. Many hobbyists use the term loosely with no clue to what it actually means.

"Numbers matching" simply means a car which not only appears in original factory condition, but in which all pertinent identification numbers, as well as all casting numbers and dates, are correct for that specific model and pre-date the final assembly date of the car.

(The term probably originated in the Corvette restoration hobby. It seems these cars were the first to be restored back to true originality. ) It is important to also make the distinction that a car is only original once, period.

There are more and more "manufactured" cars turning up in collectors' hands, cleverly documented to be original numbers matching vehicles. What I mean by "manufactured" is that the car has been rebuilt with correct casting numbers to appear original and to match the documentation to be included in the sale of the car.

To say that this situation is creating a major problem in the hobby is a vast understatement. Thousands of dollars are being invested into many matching number cars which in fact are complete forgeries, built for the primary purpose of selling an incorrect car as a documented original.

Many enthusiasts are unsure as to what composes a correct car. Much of the information that has been published to date in this area has been incorrect in several aspects.
TRANSMISSION IDENTIFICATION

This chapter covers all transmissions from 1970 through 1975. This introduction gives a brief overview of the transmissions, while the rest of the chapter is structured by model year to allow you to quickly and easily determine transmission applications. Under each year heading there is a quick-access section, transmission specifications with parts casting numbers, and stamping number decoding.

At the end of this chapter are specific transmission casting number charts, which will allow you to access individual casting numbers without hunting through the entire chapter.

Casting date codes can be found on almost all maincases, extension housings, and sidecovers. Most casting dates are in alpha-numeric style, and usually follow the same pattern as blocks and cylinder heads. Many casting dates are difficult to read.

The first digit of a casting code is usually a letter, to designate the month. The second digit will be a letter, designating the month. The third digit designates the day of the month, while the fourth (or last) digit designates the calendar year.
If you absolutely want to know the original parts for your Chevrolet - not what interchanges or fits, but the correct part that came with your car when it was assembled - Chevrolet by the Numbers has the answer.

Thomas Novellino verified customerMarch 31, 2020
My "Boss" 1970 Chevelle SS.
This book was Incredible, part no# that I was looking for my Chevelle parts numbers certainly showed in your book. Many of the car numbers matched the book. My Chevelle was built in the General Motors plant in Oshawa Ontario, Canada. Many of my Chevelle numbers were in along with Canadian documentation. Thank you for a wonderful book. That bring out great parts numbers. These Legends, are still drawing crowds at Car Shows! Because of there thrill to see them once more. My statement has always been "What Once Was" Much thanks for this incredible book, of "History of General Motors Parts, and Numbers". Thank you .
Was this rating helpful to you?   👍 Yes    👎 No
Click here to review this product
(Reviews are subject to approval)
You May Also Like
Chevrolet By The Numbers 1970-1975: Chevy V8 Drivetrain Casting Part Numbers
$33.95
Free Shipping (US48)
Out of Stock
Close
Top
Close
Open