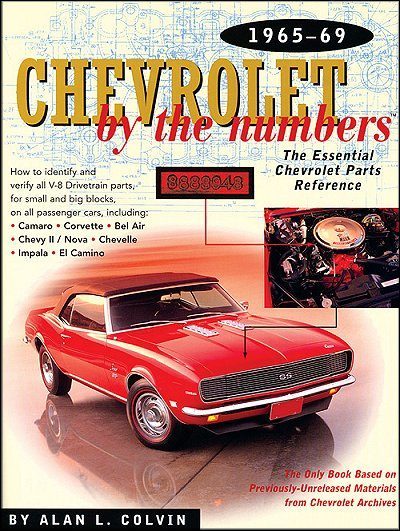 So what do you do if you are trying to restore a 1965-1969 classic Chevy car and would like to use the exact and correct drivetrain parts? Finding interchange parts that will work is not a problem, but interchangeable parts is not the aim of Chevrolet By The Numbers: 1965-1969.

The purpose of this guide, plain and simple, is to help you avoid buying the wrong drivetrain parts, whether you have a Small- or Big-Block V8 Chevy passenger car.

If you are restoring your Chevy back to original factory specs, you will require parts with casting numbers that correspond to your car's Vehicle Identification Number (VIN), so the resulting product will be a "matching numbers" car.

Chevrolet By The Numbers: 1965-1969 gives you all drivetrain casting part numbers, as well as their application. All this information was gathered from original documents from Chevrolet's archives, making this guide the most authoritative book of its kind.

The casting number is critical because it does not change across model applications. (If there are deviations in the casting number usage, they are noted in the book). For example, the same engine or transmission used in 1955 on a Corvette and a Passenger car in many cases has the same casting number. Part numbers will only help if the part you are looking for is in the original box.

Any part can but put into a box with a rare part number on it, but the casting number will always be on the part. You won't find many 30 year old drivetrain parts still in the original box. The casting number is always the number you want to refer to when checking parts at a swap meet or on a car you intend to buy.

The second purpose is to allow you to quickly find a model year application heading and efficiently find whatever model year and car type you have, while cross referencing back to the casting number lists. Included in the back of this book is a page on which you can fill in all pertinent information about your car so you can turn to that one page for quick reference while searching for parts.
ENGINE BLOCK IDENTIFICATION

There are at least 30 different engine blocks installed in cars from 1965 through 1969. At the same time, there were only 8 basic engine displacements, so in many cases there are a number of blocks that may at first appear correct for a specific engine application.

There are a number of ways to identify an engine block. The main ones are the block casting number, the block casting date, and the engine code stamping. On big blocks, the crankshaft main bearing cap bolt pattern (2- or 4- bolt) can be determined by checking the oil filter mounting area.

All original blocks have a special grain which was machined into the surface of the block deck. The grain pattern is a series of very fine straight lines, called "broach" marks, running from front to back along the top of the block.

The original equipment that left these marks is no longer in use, although there are rumors that the service can be bought in certain engine circles. Most modern milling machines use a rotary cutter which leaves a swirl broach pattern.
If you absolutely want to know the original part numbers for your Chevrolet drivetrain - not just what interchanges, or fits - but the correct part that came with your car when it rolled off the assembly line - Chevrolet by the Numbers: 1965-1969 has the answers.

Allen verified customerMay 14, 2020
Chevy By The Numbers 1965-1969: Chevy V8 Drivetrain C asting Part Numbers
Great Book
Was this rating helpful to you?   👍 Yes    👎 No
Click here to review this product
(Reviews are subject to approval)
You May Also Like
Chevrolet By The Numbers 1965-1969: Chevy V8 Drivetrain Casting Part Numbers
$33.95
Free Shipping (US48)
Out of Stock
Close
Top
Close
Open