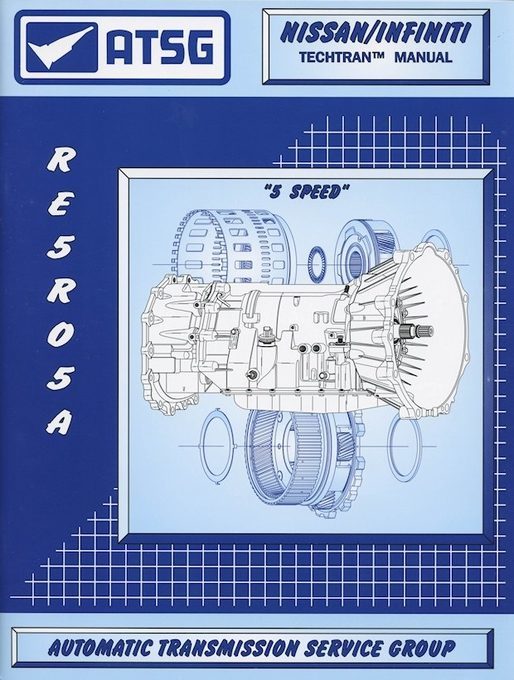 Brought to you by the minds at ATSG, the Nissan / Infiniti Transmission Rebuild Manual is a comprehensive resource for tranny projects with a focus on the RE5R05A. This is an in-depth tool for the professional transmission shop, experienced mechanic and basically anyone who believes they have a good chance of successfully removing and installing an auto transmission into a Nissan or Infiniti.

Found in a range of Nissans and Infinitis produced in the 21st century, the RE5R05A is a five speed, rear wheel transmission that utilizes full electronic controls with a fifth gear overdrive. Manufactured by JATCO, it has 2WD and 4WD versions, and minimizes fuel consumption with a TCM-controlled torque converter clutch.

While there are variations between models, this manual covers all the general applications for a Nissan / Infiniti transmission rebuild using a Nissan Armada/Titan trans. This is where the foreknowledge of working with trannys is going to be critical. Your experience may require things like knowing if components are interchangeable.

If you do have the chops, this Nissan / Infiniti Transmission Rebuild Manual is your first line of defense in managing wire schematics, transmission case assembly, all sprag freewheel direction and front brake band adjustment. From line pressure specifications to rotating output shafts, you’ll be ready to upgrade any recent model Nissan or Infiniti trans.

Be aware this isn’t a typical DIY manual. It assumes you have some idea of what you’re doing and can manage productions with tons of specs, diagrams and instructions that get to the point. Curt verified customerSeptember 25, 2016
Good
Good book
Was this rating helpful to you?   👍 Yes    👎 No
Click here to review this product
(Reviews are subject to approval)
You May Also Like
Nissan / Infiniti Transmission (RE5R05A) Rebuild Repair Manual: 2002-2016 by ATSG
$32.84
Free Shipping (US48)
In Stock
Close
Top
Close
Open