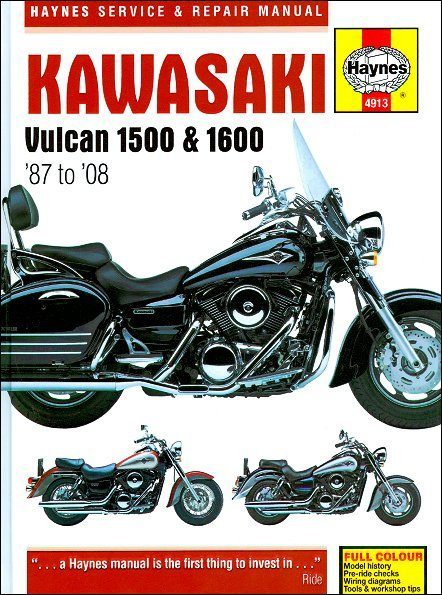 Turn the ignition switch ON and ground (earth) the end of the wire. If the light comes on, the oil pressure switch is defective and must be replaced with a new one.

Note that on all except VN1500A and B and Classic D, E1 and F1 models the system is fitted with a three second delay unit to prevent the light coming on during heavy braking and acceleration when oil surge occurs.

Hugo Ortega verified customerDecember 3, 2019
Nice book, quick delivery
Delivery was good no hassle, the book speaks for itself.
Was this rating helpful to you?   👍 Yes    👎 No

Leigh Ann verified customerJanuary 4, 2016
Extremely pleased!
I am so pleased with this purchase! Easy to find and purchase on the site, ordered quicker shipping and got my purchase within three days (and that's during Christmas shopping weeks)! Perfect condition, thank you guys!
Was this rating helpful to you?   👍 Yes    👎 No

Larry Nordby verified customerMay 2, 2014
Was as advertised. See comments.
Wish the book had more (Or at least some) basic Owners Manual Information. The information it does contain is organized, clearly presented and complete. I'm a basic mechanic (pliers and screwdriver) so much of this will never apply to me. All in all I'm satisfied with the purchase.
Was this rating helpful to you?   👍 Yes    👎 No
Click here to review this product
(Reviews are subject to approval)
You May Also Like
Kawasaki Vulcan 1500, Vulcan 1600 Repair Manual 1987-2008
$41.85
Free Shipping (US48)
In Stock
Close
Top
Close
Open