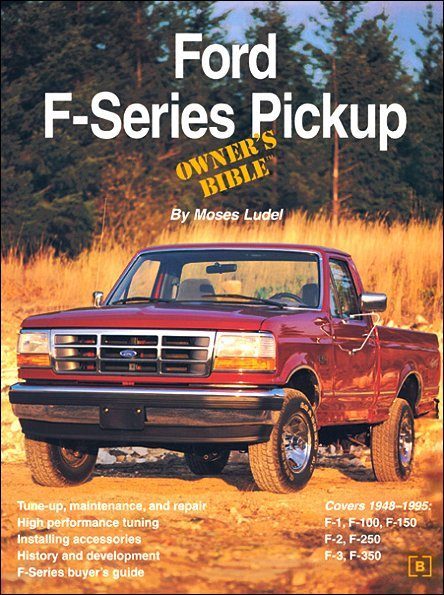 The best-selling pickup truck in America is the Ford F-Series pickup. There are more than half a million units sold each year, and sales are constant.

In the Ford F-Series Pickup Owner's Bible, author Moses Ludel, has written an authoritative companion to your F-Series truck, with tips covering every aspect intended to help you get the most out of your Ford pickup, regardless of how you use it.

But the Ford F-Series Pickup Owner's Bible, a Motor Bookstore bestseller, does not stop there. Understanding that many -- if not most -- Ford truck owners take pride in performing their own maintenance, this comprehensive guide provides step-by-step instructions accompanied by hundreds of photos that cover the whole truck-maintenance spectrum; from oil and filter change to basic tune-ups to more advanced tasks, such as engine, tranny, brake and electrical work, they are also covered.

And as far as performance, Moses went straight to the experts at Ford Motorsport, where he worked with Ford's SVO (Special Vehicle Operations) engineers to give you the best high-performance tips for your Ford pickup; from camshafts to camber adjustments. If you want to know how to buy, drive, maintain, or modify your truck, Ford F-Series Pickup Owner's Bible will show you the way.

Does this manual contain 1990 f super duty diagram for hvac vacuum?
This manual does not contain information on the HVAC Vacuum diagram.

Patti verified customerDecember 28, 2017
Excellent
Quick delivery, excellent condition. Thanks.
Was this rating helpful to you?   👍 Yes    👎 No

Paul W Harvey verified customerMay 20, 2014
Well pleased
A very good book, help with finding the book, prompt shipping and delivery is appreciated. thank you
Was this rating helpful to you?   👍 Yes    👎 No