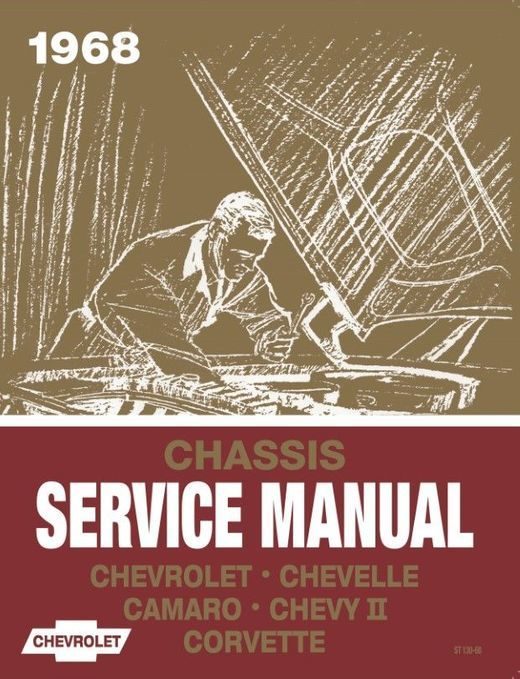 You'll be ready to embark confidently on any service procedure with this 1968 Chevrolet Chassis Service Manual reprint. Our Chevy factory-written service manual reproductions are exact replicas of the original manuals, which were issued by the manufacturer for use by their dealership mechanics back when these cars were new. Included in this over 600 page guide are a huge number of black and white photographs, wiring diagrams and illustrations to further clarify the detailed text instructions provided. With this manual, you'll be able to breeze through work on the heating and air conditioning, front and rear suspension, engine, brakes, fuel tank and exhaust, clutch and transmission, steering, electrical system and much more.

In 1968, Chevrolet rolled-out an exciting line-up of vehicles. The popular Camaro was entering its second year of production and offered good looks backed with a variety of performance. The legendary Corvette took on a new body, which really looked like Stingray. It had some engine options that provide the sting. Whichever classic 1968 Chevy model you're looking to service, this shop manual is the definitive source.

NOTE: This manual contains body service information for the Corvette only.

This Chevrolet service manual reproduction covers routine repair and maintenance for the engine, transmission and rear end, but doesn't include instructions for a complete overhaul. Clay Zartman verified customerDecember 11, 2019
1968 Bel Air
Book is of High Quality, and seems to be full of good information. Torque Specs and everything you basically need to know is within. Has helped out already since Purchase.
Was this rating helpful to you?   👍 Yes    👎 No

Richard Mansfield verified customerDecember 4, 2019
1968 Fisher body manual
This manual has specifications, diagrams and explanations. It will be useful to anyone working on the 1968 cars covered by the manual.
Was this rating helpful to you?   👍 Yes    👎 No

Larry Adams verified customerJanuary 13, 2018
1968 Chassis Service Manual
Very pleased with this purchase. The manual has more information than my previous one that was stolen in a burglary.
Was this rating helpful to you?   👍 Yes    👎 No

jeff peteck verified customerJuly 7, 2016
this book is nice to have
fast shipping
Was this rating helpful to you?   👍 Yes    👎 No
Click here to review this product
(Reviews are subject to approval)
You May Also Like
1968 Chevrolet Chassis Service Manual
$30.00
Free Shipping (US48)
In Stock
Close
Top
Close
Open