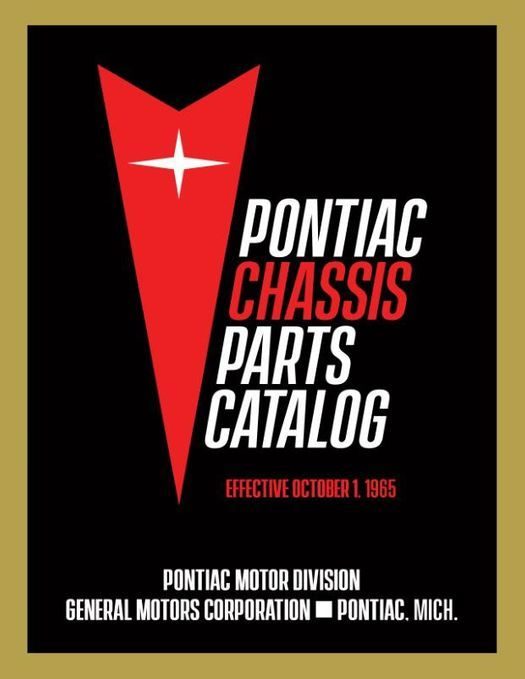 This 1963-1966 Pontiac Chassis & Body Parts Catalogs is a high-quality, licensed PRINT reproduction of the parts catalog written and first published by the experts at the original equipment manufacturer (OEM), Pontiac Motor Division, for use by their dealership mechanics. This parts book set is a great addition to your service manuals. Here, you’ll find a massive amount of information NOT included in those other guides. There are thousands of pages of useful information regarding your classic Poncho.

While many competitors sell the chassis and body parts catalogs separately, we’re proud to sell them as a complete set. It just makes sense. Otherwise, it’s like only having some of the chapters of a book. When you purchase our set, you’ll know the story from start to finish.

Not only will you be able to determine which parts and fasteners are correct for your car, you’ll also be able to establish if you are missing anything. You’ll see how the items are designed to fit together. It’s also a great resource to find which parts will interchange from other years and vehicles! That dramatically increases your chances of success at the swap meets and salvage yards. Since many companies still refer to the original part numbers, you’ll have that information at your finger-tips as well.

NOTE: Due to the fact that many parts carry over for a number years, and other factors, this book actually covers a great deal more than just the 1963 – 1966 model years. You’ll find items stretching back decades earlier. There’s light coverage of 50s models (and even older). You’ll find moderate coverage of early 60s Pontiac vehicles, but due to the fact that the outstanding coverage is geared toward the 1963 – 1966 Pontiac models, the publisher has chosen to title this set accordingly.

Please take a moment to check out the sample pages below in order to see just how well the excellent visual aids pair with the comprehensive text. The exploded views are extremely helpful in showing you how the puzzle should be assembled. The combination of text and illustrations included by the factory experts serves to provide you with an exceptional look at how these popular models were constructed.