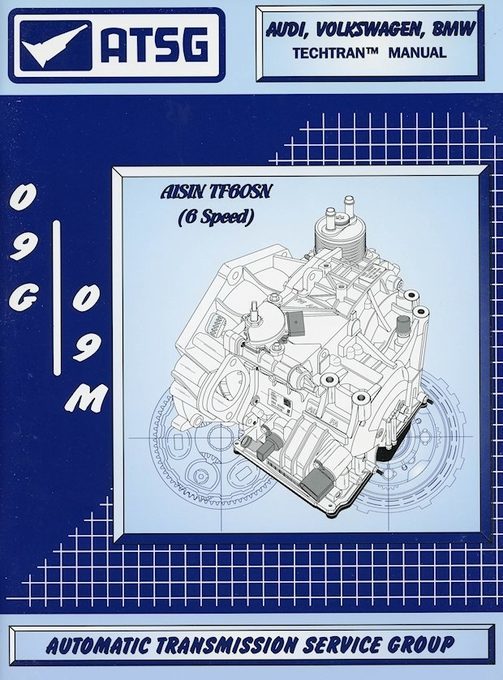 Produced by one of the most respected supporters in the auto transmission industry, the Audi / Volkswagen / BMW MINI Transmission Rebuild Manual is a thorough and detailed study of the 09G, 09M, 09K, 6F21WA and/or TF600SN transaxles. This is a fully automated, six speed, electronically controlled device manufactured by AISIN.

This manual is where you’re going to get the 411 on individual solenoid function and failure, pass-through case connections and wire harnessing, shift quadrants, pressure tap identification and location, transaxle disassembly and reassembly, and much, much more. It’s filled with vehicle application charts and detailed descriptions.

To our minds, the idea that these three vehicles are using the same type of transmission is as interesting as it gets. The Volkswagen is infamous for its compact and affordable cars, including the Beetle, Jetta and Passat, three of the best-selling vehicles of all time. Audi designs, engineers, produces and markets luxury vehicles such as the A3, A4, and TT. BMW MINI Cooper is, of course, one of the most sought after brands in the auto industry. We think the idea that these three well-respected leaders in unique auto engineering use the same power source demonstrates how closely connected all vehicles are.

If you work on these vehicles, you want the Audi / Volkswagen / MINI Transmission Rebuild Manual in your arsenal. Used in a wide variety of engine sizes and applications, knowing the 09G and 09M transaxles is going to be beneficial. The manual covers every minute detail of upgrading these trannys and identifies the differences so that you never make a mistake because of altered case covers or part configurations.