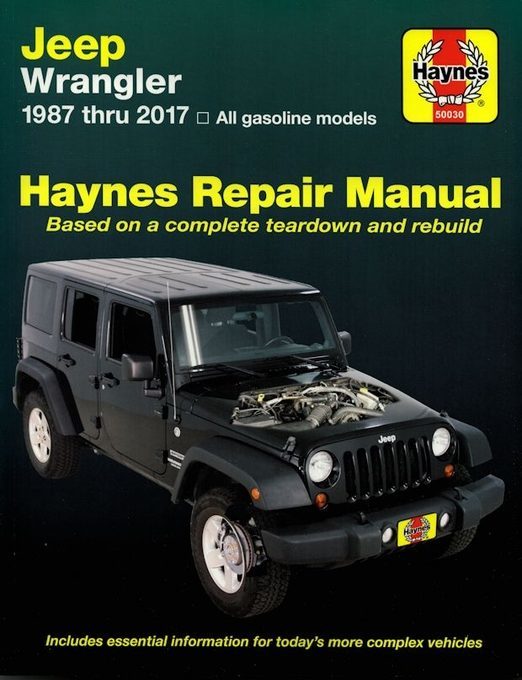 Note: This manual does not provide diesel engine information. Above: Cesar Rivera of Montebello, Calif., enjoys putting his 2008 Jeep Wrangler X between a rock and a hard place more often than not. Here's the Jeep off-roading at Johnson Valley OHV, in Lucern Valley, CA.
Questions & Answers about Jeep Wrangler Repair Manual 1987-2017

Jo verified customerAugust 30, 2016
Not perfect but still a good deal
Since almost ten years I rely on Haynes repair manuals and I am happy with it. i am not a proffessional DIY-mechanics and rather lazy, so the manuals are more detailed than I usually need them. Other reviewers claim that it is not well matching for newer Wrangler models. That's really an issue with this book, but should consider that for most modern cars such manuals are simply not available. In so far it is still a good deal.
Was this rating helpful to you?   👍 Yes    👎 No

John Kareski verified customerMarch 4, 2015
Not as detailed as expected.
This is a very basic beginner repair manual. Does not include the detail I expected. Hi John. A factory shop manual may be a better fit for you. The Haynes repair manuals are written for beginner or intermediate DIY mechanics. A factory shop manual is the literature provided to the Jeep dealer mechanics and will have every detail; however, factory shop manuals are written for professional mechanics - step-by-step procedures will be less emphasized. We offer a 30 day return policy if you would like to return or exchange this manual.
Was this rating helpful to you?   👍 Yes    👎 No
Click here to review this product
(Reviews are subject to approval)
You May Also Like
Jeep Wrangler Repair Manual 1987-2017
$28.95
Free Shipping (US48)
In Stock
Close
Top
Close
Open