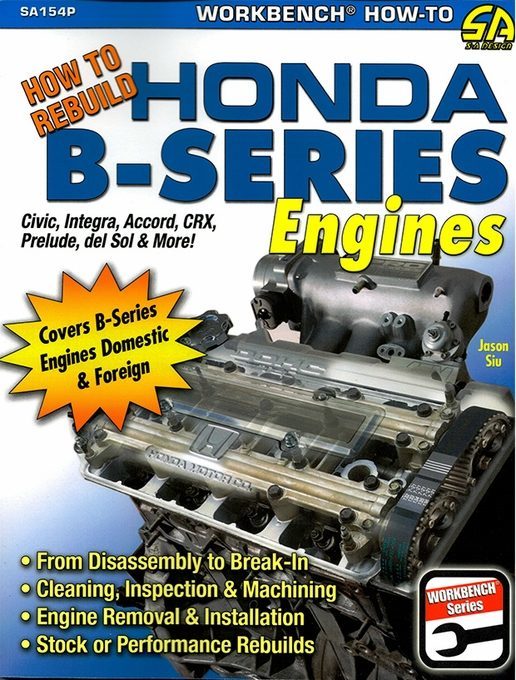 If you are thinking about rebuilding your Honda B-Series engine, this is the guide to show you the way.

Packed with more than 600 photos and step-by-step instructions, this is the best manual of its kind.

NOTE:: This book edition has black and white photos.

Covering the process from engine removal and disassembly to cleaning, inspection and parts machining, all the way to reassembly, starting and break-in, you will know that your engine was rebuilt the right way. Whether to stock or to high-performance standards.

The book covers all Honda B-Series engines, including VTEC and non-VTEC (both foreign and domestic), including the B16, B17, B18 and B20 models. OBD differences are also discussed, as are the many performance upgrades, components and accessories available for these engines.

How to Rebuild Honda B-Series Engines also includes a Work-A-Long Sheet, which will help you keep records of vital stats and engine measurements during the rebuilding process. You will also find tips that will help you save money without compromising desired performance results.

THE HONDA B-SERIES | BEFORE YOU BEGIN

Rebuilding any engine is no easy task. The reason for your rebuild can range from refreshing an engine with hundreds of thousands of miles, to wanting to extract every bit of performance, and everything in between.

The information provided within these pages can serve as a reference to not only familiarize yourself with the Honda B-Series engine, but also give you the foundation you need for your rebuild.

Whether your goal is to rebuild your engine back to factory specs or for additional performance, this text explains the necessary tools, steps, and products to help point you in the right direction.

Before we begin, let's take a look at the history of the B-Series engine and the differences between each and every one of them.

INTRODUCTION OF THE B-SERIES

Our main focus for this text is on the B16/B18 family, where many of the popular B-Series parts (OEM and aftermarket) are interchangeable.

The B-Series engines have become the most coveted Honda engines due to their reliability and the ability to produce high horsepower relative to their displacement. They are also readily available and can be found reasonably priced.

The major benefit of the B-Series engine is also the ability to be transplanted into various Honda chassis, such as the Honda Civic.
THE TEARDOWN PROCESS

Given the variety of B-Series engines available on the market, it was tough for us to decide which one to rebuild for this project. We ultimately decided on a 1989 B16A engine from Japan, a B-Series powerplant that is readily available through engine distributors and something that is commonly seen swapped into various Honda and even Acura chassis.

As mentioned before however, the B-Series rebuild process is essentially the same across all the various types, unless you are dealing with a non-VTEC application. We chose to work with a VTEC motor since that is the most common and those seeking performance will find it the more viable option.

Instead of boring and confusing you with endless paragraphs of text, we'll show you this process with step-by-step photos, including a breakdown with specifics on bolt sizes, locations, and recommended tools.
INSPECTION AND DECISION MAKING

Now that you have your motor disassembled and (hopefully) your parts separated in an organized fashion, you can take some time to inspect your parts to learn some history behind your engine. This will help in determining which parts you want to reuse and which parts you want to upgrade and/or replace. The majority of your parts, however, should be professionally inspected by a machine shop if you are unsure.

In Chapter 4 we'll take a closer look at choosing which parts you want to purchase depending on your goals. Your priority now is inspecting the parts that you have removed to determine the extent of damage and find out just how much you are going to spend.

It's best to start at inspecting all the hardware such as bolts, nuts and studs, that you have removed. If you find any that are damaged or are not in the condition that you wish them to be, they are very cheap to replace from a local dealership. Once you have that done, inspect your oil pickup screen for any noticeable debris such as large metal pieces that could be particles from the piston rings or bearings. This is usually a sign of excessive engine wear or damage.
About the Author:

Specifications
Table of Contents
TABLE of CONTENTS:
Questions & Answers about How to Rebuild Honda B-Series Engines

Questions & Answers about How to Rebuild Honda B-Series Engines