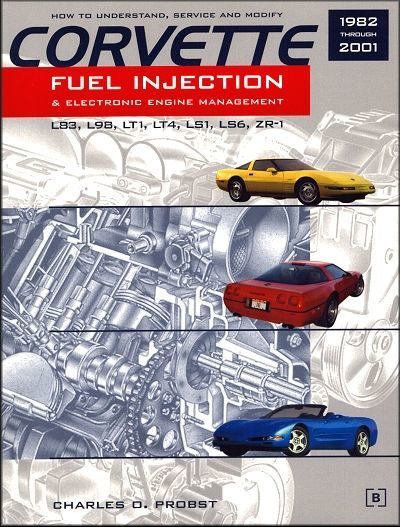 How to Understand, Service and Modify Fuel Injection and Electronic Engine Management Systems

This comprehensive manual will give 1982-2001 Corvette enthusiasts, a complete and comprehensive analysis of theories behind fuel injection systems.

The engine's electronic management system is considered by most as being the heart of the Corvette engine, and Corvette Fuel Injection and Electronic Engine Management explains that system in detail.

Covering systems for engines from 1982 through 2001, including the L83, L98, LT1, LT4, LS1, LS6 and ZR1, this book is a must-have for any DIY mechanic working on one of these Chevy Corvette powerplants.

Attach a fuel pressure gauge as described above.


We purchased the Corvette Fuel injection manual. Our objective is to install an LS1 engine and complete control system into our 1989 S10 pickup.

As the truck will have to meet emissions standards, all of the equipment that comes with the engine needs to operate.

Reading through this manual has so far been invaluable in understanding how all of the components interact and make the control system work. It should improve the odds considerably of getting it to work well.

I know that I will have to re read some sections as it is a complicated system, but the chapters are relatively easy to read and understand.

I would recommend this book to anyone that wishes to understand how these things work.

Chuck Probst, author of the authoritative Bentley books on Bosch and Ford fuel injection systems, has worked with GM and aftermarket engineers, trainers, and technicians to bring the same sort of inside information to an authoritative understanding of Corvette engine controls.

No other book comes close in providing this much detailed, proven information, with 380 pages including 112 pages of model-specific wiring diagrams, trouble codes, and test specifications along with hundreds of photos and illustrations. Get it and go faster!