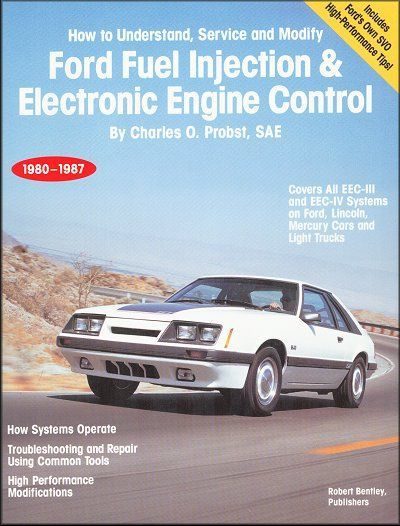 The Ford Fuel Injection, Electronic Engine Control 1980-1987 repair/how-to book, written by Charles Probst and published by Bentley Publishers, will show you how to service and modify your fuel injection system.

This Bentley manual is a hands-on guide for do-it-yourselfers and pro mechanics alike. It is intended to help you understand, service and modify your Ford EEC-III or EEC-IV injection system. In addition, the comprehensive troubleshooting sections, packed with service procedures, tips and tricks, will help you master your Ford's engine control system.

Learn the hot set-up for your car or truck. What works, what doesn't, and how to keep your Ford emissions-legal.

The manual covers 1980-1987 Ford models with EEC-III and EEC-IV Multi-Port Fuel Injection, including:

As I discussed in Chapter 2, Idle Speed Control (ISC) is miss-named because it has many functions:

These extra functions are hidden by the name, Idle Speed Control. What I'm talking about is the amount of air that enters the engine when the driver's foot is off the accelerator. Ford uses three methods of controlling that air:

In general, you'll find DCM on CFI engines and BPA on port injection engines. Exception: 5.0L CFI uses a thermostatic fast-idle cam, similar to one used with carburetors. Such thermostatic fast idle includes a Throttle Kicker (TK). When the Air Conditioner is turned on, TK "kicks" the throttle open slightly to increase the idle speed.
TUNING FOR PERFORMANCE AND ECONOMY

The benefits of higher pressure are accompanied by some additional concerns, the main one being safety. With fuel lines and connections subjected to higher pressure, naturally you run an increased risk of leaks or outright failure.

To ensure reliability, the standard Ford parts are rated for pressures well above the normal operating range but, in theory at least, significantly higher fuel pressures may be a source of problems.

Higher fuel pressure may also place an increased demand on the fuel pump. This may be a problem if the pump is expected to operate above its designed delivery pressure.

Increasing the air flow by turbo/supercharging falls into two categories:

No other book gives you this much detailed, proven information. With over 300 pages, including all model-specific wiring diagrams, trouble codes, test specifications, and hundreds of photos and illustrations, this is the manual for Ford enthusiasts, professional repair technicians and high-performance tuners who really want to understand and get the most out of their Ford.

Jeff Griffith verified customerJanuary 30, 2020
Happy camper
Book arrived super fast and in excellent shape!
Especially for being an older book and hard to find.
Friendly service, will definitely be buying books from here again.
Thanks for your service!!


Was this rating helpful to you?   👍 Yes    👎 No
Click here to review this product
(Reviews are subject to approval)
You May Also Like
Ford Fuel Injection, Electronic Engine Control 1980-1987: How to Understand, Service, Modify
$34.95
Free Shipping (US48)
Out of Stock
Close
Top
Close
Open