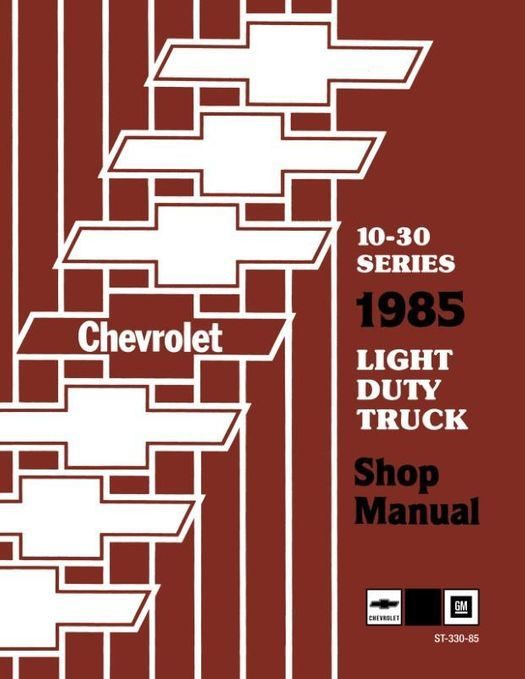 This 1985 Chevy LD Truck 10-30 Series Shop Manual is a high-quality, licensed PRINT reproduction of the shop manual written and first published by the experts at the original equipment manufacturer (OEM), Chevrolet Motor Division, for use by their dealership mechanics. Now, this superior resource can be yours!

NOTE: This manual contains 11” X 26” fold-out wiring diagrams. You won’t find that handy feature in many (if any) competitors’ reproductions. Don’t cheat yourself out of this valuable tool.

Containing a staggering 1,764 pages, you can be sure this service manual is comprehensive. The publisher, Detroit Iron, uses a thicker, higher-quality paper than the super-thin original, so the material has been split into two volumes, but don’t worry. All of the factory content has been retained. Speaking of content. You’ll love it. In addition to the easy-to-follow, step-by-step text instructions, they have included a huge number and variety of visual aids to provide unmatched clarity and assist you all along the way. Take a look for yourself. That is, please scroll down to see some sample pages which shows how well it all works. The first sample gives you a look at some exploded view diagrams and how the content is neatly organized and delivered. The second shows one of the many diagnostic flow charts to help you troubleshoot your way through projects.

In 1985, while it seemed the whole country was going “Back to Future”, General Motors (GM) was sticking with a good thing. In 1973, when they made their debut, GM called the third generation of their trucks “Rounded Line”. Virtually everyone now affectionately calls them “Square Body”. They were a hit and may be even more popular now than they were when new. The 1985 models are great members of that legendary family, and it’s easy to see why they are so loved. Be sure to keep yours at its best by using the factory instructions and correct specifications to get the jobs done right. Because they were originally designed for the manufacturer’s mechanics, you know the jobs are organized accurately, completely and efficiently. Fortunately, you won’t need to work on anything as complicated as a fusion reactor or flux capacitor…Great Scott!