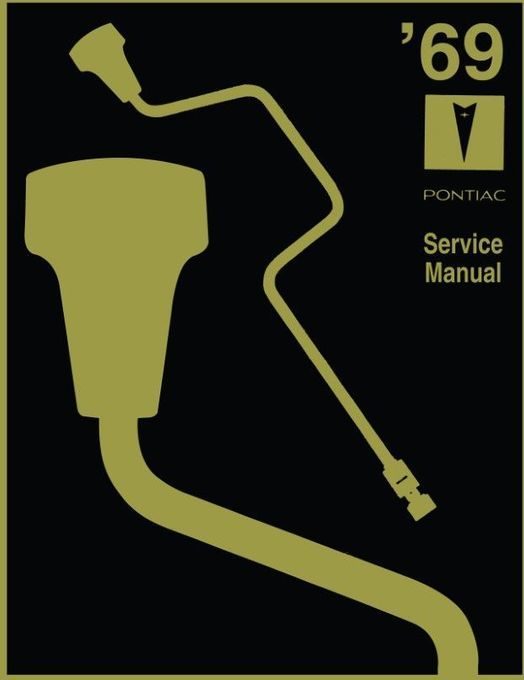 Are you searching for a great '69 Firebird shop manual? We have what you need! Detailed step-by-step instructions, a large number of black and white photographs, illustrations and other visual aids make this factory-issued 1969 Pontiac Service Manual reprint essential for owners of these vehicles (and the mechanics and professional restorers who regularly work on them). Because it's a reproduction of the factory-written service manual, you can be sure the jobs have been laid-out in an efficient and effective manner. At close to 900 pages, you'll find it's packed with the information and specifications you'll need to take on your Poncho projects from small to large.

NOTE: Body information is contained in the 1969 Fisher Body Service Manual - For All Body Styles which can be found by clicking here... Fisher Body Manual.

Pontiac was widely known as the General Motors division that leaned toward performance and loved to bring excitement. Certainly in the mid to late 60s this was true. There's no doubt that 1969 was a year in which we saw Pontiac carrying on this tradition. Need proof? It was the year that marked the introduction of the sporty Trans Am. These were tremendous cars designed for road racing, so it's no surprise they featured superb handling characteristics. Initially produced in small numbers, word soon got out about the Trans Am and it went on to became an automotive legend.

The information contained in this manual applies to all 1969 Pontiac automobiles, including the Bonneville, Catalina, Custom S, Executive, Firebird, Grand Prix, G.T.O., Le Mans, Le Mans Safari and Tempest. So if you're in the middle of a challenging restoration project and need a factory service manual ('69 GTO included), this is it. But this isn't just a 1969 Pontiac GTO factory service manual. It also covers all of these other great models. That fact makes this guide great for DIY owners, but also for professional mechanics who specialize in vintage Pontiac vehicles.

The Pontiac manual includes service information and standard maintenance procedures for all components of the car except the body. This includes the engine, transmission and clutch, brakes, front and rear suspension, heating and ventilation, fuel tank and much more. Detailed electrical diagrams are included as are illustrations and instructions for the cruise control, clock, speedometer, lamps, radio, tape player, speakers and other accessories.

If you're looking to supplement the factory manual with an aftermarket DIY repair manual (1969 Firebird and other years), please see the Chilton Pontiac Firebird 1967-1981 Repair Manual. Kim johnson verified customerApril 13, 2021
Great book
I bought this for my husband. He just recently bought a 69 gto. He's very much a car guy...but never a Pontiac guy. So when things started needing a little tuning, He was nervous about it. He absolutely loves this book!! Its his go to Bible.
I'm so happy I got it for him

Chuck verified customerDecember 27, 2017
Pontiac Service Manual
A must have for maintenance and restoration.
Was this rating helpful to you?   👍 Yes    👎 No

Arthur verified customerNovember 12, 2015
Just what I've been searching for
It's filling those gaps that other publications have left out; they are now on the shelf. And, the CDs from another source were returned. The illustrations are good and actual information such as torque requirements are supplied as well. Over all this could have been the first stop for information and I'd use it again. I am glad you had such a book back to 1969.
Was this rating helpful to you?   👍 Yes    👎 No
Click here to review this product
(Reviews are subject to approval)
You May Also Like
1969 Pontiac Service Manual
$37.95
Free Shipping (US48)
In Stock
Close
Top
Close
Open