How To Build Horsepower 2nd Edition: Proven Methods for Increasing Horsepower in Any Engine 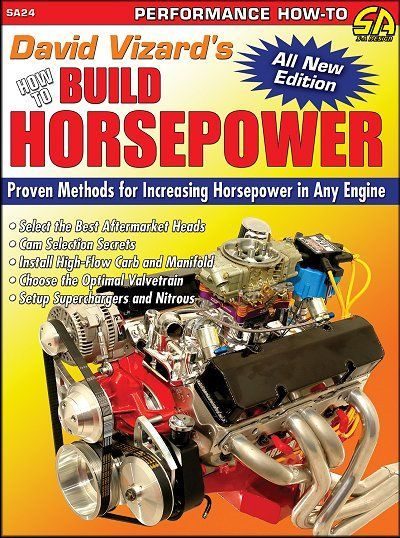 In this book, David Vizard explains the art and science on extracting the maximum horsepower from engines, as well as all the aspects of engine power output and building high-performance powerplants.

Learn how to optimize engine components, such as aftermarket cylinder heads for superior power flow, determine the best valvetrain components, learn how to select the best camshaft and get insights into all aspects of cam performance.

But Vizard dows not stop there. He also covers superchargers, nitrous oxide systems, ignition, how to install a high-flow carburetor and manifold, and many other aspects of building a reliable high-performance engine.


Book Excerpt: How To Build Horsepower 2nd Edition: Proven Methods for Increasing Horsepower in Any Engine

The greater our success in terms of porting and increasing compression ratio and engine RPM, the harder it becomes to effectively light-off the compressed charge. Fortunately, improving the ignition is not a great challenge these days and, for the most part, not that costly either. But the situation has not always been so.

Until the 1970s, the contact breaker (or, as they were often called, points) system dominated. In such a system, the spark was triggered when the contacts were opened by the cam in the distributor. This system was prone to many mechanical and electrical problems. From the mechanical aspect, the points were prone to bouncing near the top of even a stock engine's RPM range. They also needed continual adjusting to maintain the correct gap. This was important; it controlled not only the coil charging time but also how cleanly the points separated on opening. These factors affected spark intensity and RPM capability.

Generating a big fat high-temperature spark at the spark plug, at the appropriate moment, is the number-one objective here. As hot rodders, we may have been less than enthusiastic about cars having to meet power-robbing emission standards, but the reality here is that it forced manufacturers to drastically improve the ignition system's performance, and that was good for us all.

Modern systems are generally good to excellent, but that does not mean they cannot be improved upon. Starting at the spark plug, let's see what we need to do to maximize performance.
10 RULES FOR A SUCCESSFUL STROKER BUILD

Questions & Answers about How To Build Horsepower 2nd Edition: Proven Methods for Increasing Horsepower in Any Engine

Questions & Answers about How To Build Horsepower 2nd Edition: Proven Methods for Increasing Horsepower in Any Engine