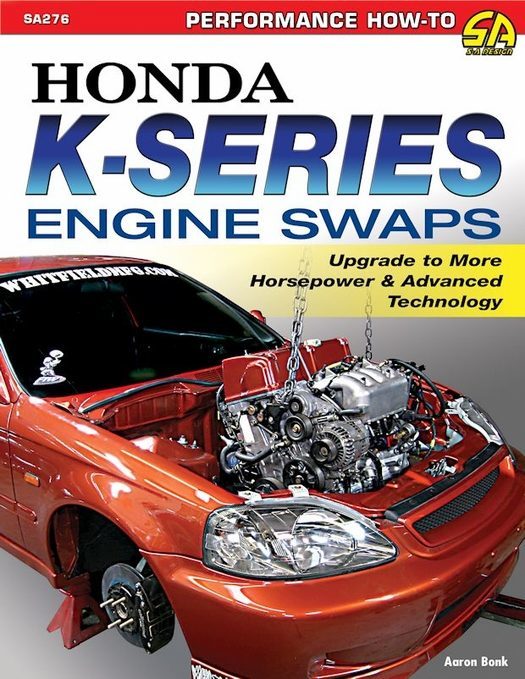 Since the turn of the century, Honda's K-series engines has become the enthusiast's engine of choice. DOHC valvetrains, friction reducing roller rockers, distributor-less ignition systems and coil-on plugs have put these babies high on the list of powerful stock.

But innovative car lovers can't get enough of a good thing. Swapping out these engines has become a pretty common practice, especially after the K20Z3 with its aluminum block hit the U.S. and Canadian markets. Unfortunately, the swap is an expensive process. Fortunately, there's Honda K-Series Engine Swaps: Upgrade to More Horsepower & Advanced Technology. This SA276 manual provides everything you need to successfully swap a K-Series engine, giving your beloved Honda new life.

As the book demonstrates, to swap a K-Series engine only requires preparation and information. With engine identification, you know what you have if you're starting with a K20A and what you'll end up with if you decide to go with a K24A3 or one of the K-series Earth Dreams. There's extensive info on electrical essentials like the toolbox and on-board diagnostics. Get a good look at what type of workspace you'll need, fluid control, transmissions, wiring and fuel systems. Look at the appropriate Civic or Integra going as far back as 1988, breaking down the process for specific models.

Whether seasoned mechanic or greasy garage jockey, Honda K-Series Engine Swaps: Upgrade to More Horsepower & Advanced Technology delivers. The book's 144 pages is chock full of easy to follow information alongside black and white images that make sure you know exactly where you are at all stages. You may love your car just the way it is, but imagine a fresh injection of tech and power, better flowing heads and a greater variable cam timing.

Aaron Bonk has been monitoring Honda performance since the 1990s. He is the penultimate source if you want to swap a K-Series engine. He wrote Honda K-Series Engine Swaps: Upgrade to More Horsepower & Advanced Technology in plain language so that everyone can take advantage of the possibilities. His other titles include Honda Engine Swaps and High Performance Honda/Acura Buyer's Guide.

Refer to the Specifications Tab for a sample page from this book which discusses a ECU Selection.

Note: This manual is a print on demand by the publisher and thus has black and white photos and diagrams. It's harder to get; however, we keep this manual in stock and offer Free and Fast Shipping to our continental US48 customers. Corey Geyster verified customerFebruary 23, 2017
Review
Great book very informative and helpful
Was this rating helpful to you?   👍 Yes    👎 No
Click here to review this product
(Reviews are subject to approval)
You May Also Like
Honda K-Series Engine Swaps: How-To Upgrade to More Horsepower and Advanced Technology
$32.95
Free Shipping (US48)
In Stock
Close
Top
Close
Open