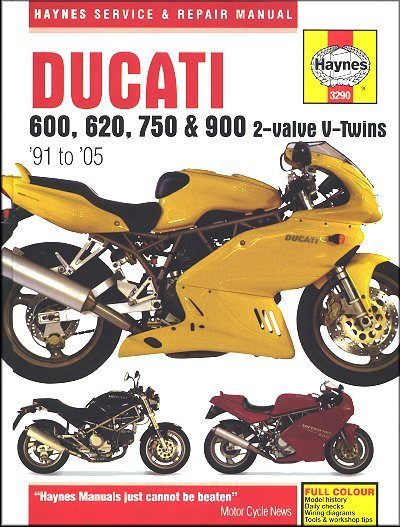 Don't let your bike languish in the garage due to some repair or maintenance issues that you can't afford to have a pro fix. Instead, take on a DIY project with confidence with the help of this Ducati service manual by Haynes. Troubleshooting Ducati 600/620/750/900 bikes just got so much easier thanks to this helpful and informative guide. It will walk you through everything you need to know about your Ducati motorcycle and offer insider technician tips to get you started on any project. From removing the fuel tank to installing new body panels, it's all covered in this Ducati repair manual.


Note: All Dark, Sport and Special Editions included in this Haynes 3290 Service Manual.

Travis verified customerAugust 26, 2017
Haynes Manual has gotten even better!
I recently 'inherited' a beautifully customized 1996 Ducati 900SS. In addition to being something I've always drooled over, it has some sentimental value, so I gotta treat it right. In short, this book is the starting point for doing that!
For everything from my classic Mustang to my POS '92 wagon, I've always said that a Haynes manual is the first tool to get for any vehicle. And now, I have corroboration right on the cover of the Duc Haynes manual. This book is even better than any of the other Haynes manuals I've used for cars in the past. The pictures are crisper, the instructions are clearer, and the complete tear-down & rebuild?right down to the pistons?is just as thorough as ever. On top of that, there's are multiple pages of full color wiring diagrams! Other color pages include model history and a Tools & Workshop Tips section. I'm not sure I understand the need for those (except maybe looking at shiny bikes in model history intro section), but whatever.