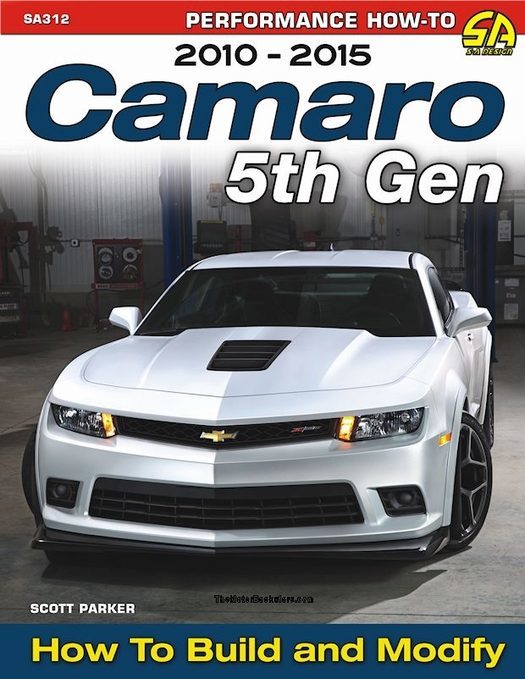 To maximize your 5th generation Camaro performance, drop a copy of Camaro 5th Gen 2010-2015: How to Build and Modify in your cart and look forward to getting the 411 on the latest models’ rear axles, brakes, intake, cooling and exhaust systems, LS engine mods, turbo- and superchargers, transmissions, ECM tuning, aftermarket EFIs and much, much more.

Of course, the very thought of the Chevrolet Camaro brings a twinkle to the eye of automotive enthusiasts around the globe. It was introduced in 1969 and quickly became a huge best seller. Today, it shares iconic status with the likes of the Firebird and the Mustang. For reasons we won’t go into here, the Camaro stopped production for almost a decade. It made a hugely successful return in 2010 with the 5th generation Camaros. They had a sleek new design influenced by previous iterations but were as masculine and powerful as ever. The new cars had tech original Camaro owners could only dream about. There were also an array of engine packages and multiple trims.

Like any Camaro owner, from day one folks never stopped looking for ways to push these babies to new limits. In that tradition, this CarTech manual for 5th generation Camaro performance is the resource for upgrading the latest models. Flex more power on the streets by knowing exactly how to pump up the front suspension or refreshing the torque converter. Tackle subframe connectors, power adders, trailing arms and tie rods. Get ready to break down and reinvigorate the engine’s tuning system and V-6/V-8 specifications.

This manual for 5th generation Camaro performance is going to be a great addition to any owner’s toolkit. Whether you want to perform the work yourself or have smarter conversations with the auto guy that’s doing the work for you, Camaro 5th Gen 2010-2015: How to Build and Modify is going to change the way you appreciate your sports car.

Scott Parker is a writer and editor with GM High Tech Performance magazine. He’s produced hundreds of technical pieces about the GM LS-Series V8 engines and has built a range of project cars. Camaro 5th Gen 2010-2015: How to Build and Modify shares the author’s deep affection for the Camaro. does this book show how to replace a clutch? thanks.
This book serves to modify and upgrade the 5th generation Camaro. Within the Drivetrain section, there are instructions (and color photos) showing a clutch install. It appears to be an upgrade to the RAM Force 9.5 or 10.5. Please note that this is NOT one of the regular type service manuals. Thanks.

Moritz Cunha verified customerNovember 24, 2020
Black and White photos
Good information but when you talk about the colors of the cars or the color of the interior and every picture is in black and white, it's pretty much useless babble.
Was this rating helpful to you?   👍 Yes    👎 No
Click here to review this product
(Reviews are subject to approval)
You May Also Like
Camaro 5th Gen (2010-2015) How to Build and Modify Performance by Scott Parker
$29.50
Free Shipping (US48)
In Stock
Close
Top
Close
Open