TWO-STROKE LEAK DOWN TEST Many owners of two-stroke bikes are plagued by hard starting and generally poor running, for which there seems to be no cause. Carburetion and ignition may be good, and compression tests may show that the engine's upper end is satisfactory. What a compression test does not show is lack of primary compression. The crankcase in a two-stroke engine must be alternately under pressure and vacuum. After the piston closes the intake port, further downward movement of the piston causes the entrapped mixture to be pressurized so it can rush quickly into the cylinder when the scavenging ports are opened. Upward piston movement creates a slight vacuum in the crankcase, enabling the air/fuel mixture to be drawn in from the carburetor.

CDI CAUTIONS When servicing the CDI system, note the following: The CDI unit is a sealed unit. Do not attempt to open it, as this causes permanent damage. 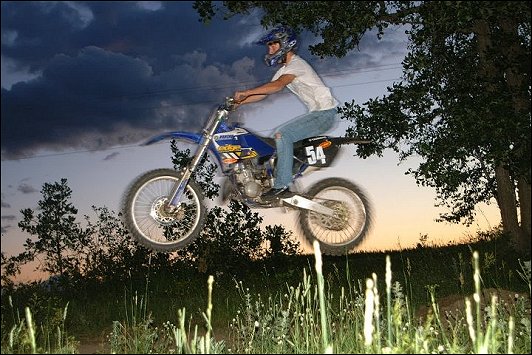 Above: Ted Abear of Ironton, Minnesota began riding dirt bikes after buying his 2001 Yamaha YZ125 from a family friend. He usually rides locally, but since trying a few motocross races in 2010, the bug bit him and he's now hooked and plans to enter many more cross races in the future.