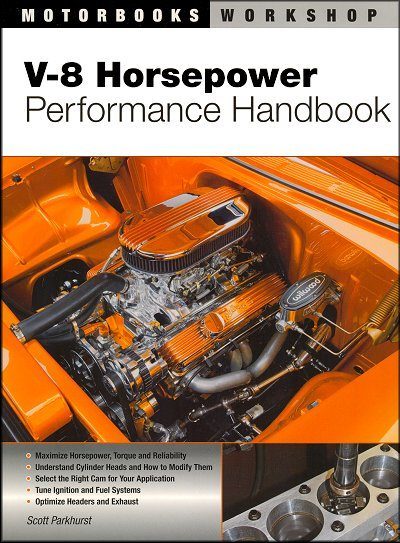 From the birth of the mass-production American V-8 engine in the 1930s to the horsepower wars of the 1960s and on through the high-tech, exotic engines of today, the V-8 has reigned as the ultimate configuration for power and reliability.

For high-performance applications then and now, these factory engines provide the basic architecture needed to build the ultimate powerplant. To exploit these strengths in a custom performance engine requires both knowledge and skill.

Knowing where to begin is half the battle, and plotting the path to your high-performance goal is the other half.

Your guide for this journey is professional engine builder Scott Parkhurst, co-founder of the Engine Masters Challenge and the founding editor of Engine Masters Quarterly and Street Thunder.

V-8 Horsepower Performance Handbook walks you through critical decisions like block and cylinder head selection, valvetrain setup, camshaft choice, and the many other components needed, regardless of the age or make of your V-8.

Scott Parkhurst's experience with high-performance V-8 engines began before he had his driver's license. Later, working as a technician in race-engine shops, he learned much about the professional preparation of high-output V-8s. To this day, Scott still works directly with enthusiasts to develop custom V-8s to suit their specific needs, and on his spare time he builds engines for his own projects.