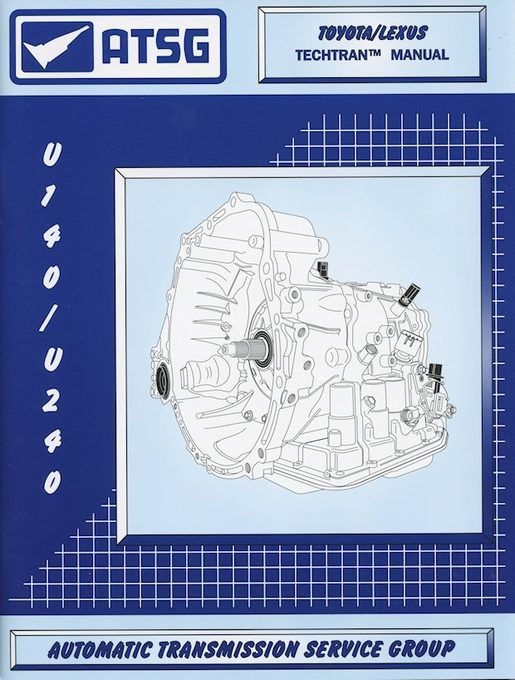 The Toyota / Lexus U140/U240 Transmission Rebuild Manual is the best way to work through an entire disassembly and rebuild of the tranny for the titled vehicles. It also covers U241 transmissions.

This tranny rebuild manual was developed with the professional transmission shop, rebuilder and experienced mechanic in mind. But it will also be a great resource for anyone with enough DIY experience to bravely attempt an automatic tranny rebuild. But be aware this is a seriously focused manual and doesn’t coddle to those who lack knowledge. You’re going to find extensive, detailed instructions with little explanation, accompanied by a ton of diagrams, tables and specs.

The U140/U240/U241 was introduced as a new transaxle in 1998. The shift points and feels were electronically controlled using a powertrain control module (PCM). The PCM monitors solenoid duty cycles and engine loading, as well as turbine and output speed sensors that calculate gear ratios.

Toyota / Lexus U140/U240 Transmission Rebuild Manual is the place to learn about:

Whether knowing when to fully seat a snap ring or removing the underdrive brake pressure plate during the transaxle disassembly, you’re going to get all the technical service information you could possible need from the Toyota / Lexus U140/U240 Transmission Rebuild Manual. Homero Ceballos verified customerNovember 9, 2020
Transmission manual
great manual!,explained everything in detail
Was this rating helpful to you?   👍 Yes    👎 No

Mudashiru ibrahimJune 2, 2018
Automatic manuabook
Automatic manual book Toyota and Lexus
Was this rating helpful to you?   👍 Yes    👎 No
Click here to review this product
(Reviews are subject to approval)
You May Also Like
Toyota / Lexus Transmission (U140/U240/U241) Rebuild Repair Manual (1998-2014) by ATSG
$32.84
Free Shipping (US48)
In Stock
Close
Top
Close
Open