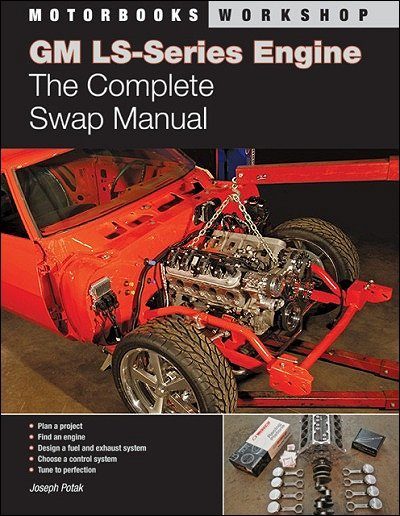 Ask any motorhead about the benefits of stuffing an LS powerplant in their car or truck's engine bay, and the reasons will certainly include words such as reliability, fuel efficiency, light weight and — above all — power!

But how is all that power acheived?

The key to that is a sophisticated electronics package that scares all but the most adventurous engine swappers.

Fortunately, this book takes the reader through all the steps required to bring a project to completion.

From mounting the engine, configuring the electronic fuel injection system, getting the correct accessories, troubleshooting, designing an exhaust system and more.

This how-to book is the ultimate guide to installing an LS motor in your car!

Engines included in this book:

Note: Horsepower will vary based on vehicle application.

INTRODUCTION TO LS-SERIES ENGINES AND PLANNING YOUR PROJECT

In 1997 the first Generation III engine hit the streets, powering the C5 Corvette with 345 horsepower and 350 foot-pounds of torque.

This basic engine carried over into the next year into the face-lifted 1998 F-body models (Camaro and Firebird) and soon thereafter gained a cult like following on such message boards as LS1.com, LS1 tech.com, CamaroZ28.com, and PlanetLSX.com, where enthusiasts quickly found the untapped power potential of the Gen III engine platform.

Though the fourth-generation F-body met its demise in 2002, it lived on and flourished under the hood of the Corvette through the 2004 model year. The LS1 also powered the short-lived Pontiac GTO in the first year of production 2004.

The introduction of the LS6 in the 2001 Z06 came with a 386-horsepower rating, courtesy of a thoroughly updated engine design that featured improved cylinder heads, crankcase breathing, and induction.

The following year, the 2002 LS6 was further enhanced with subtle improvements to the camshaft design that was complemented by lightweight intake and exhaust valves.

In 2005, a new version of the LS-series engine was introduced with the new sixth-generation Corvette. Known as the LS2, it shares many previous features such as cylinder heads, crankshaft stroke, and other similarities throughout.

Sparky verified customerJuly 31, 2016
Not really what I expected.
I will probably refer to this book more than once but, was not impressed with the type of information within. I guess I was hoping for more of a 'How to' manual. It is a book that has beautiful colored pictures and looks great. I will keep the book handy to show friends and other enthusiasts but probably will not use it in the shop. Perhaps I was looking for information I just need to learn through 'hands on ' experience.
Was this rating helpful to you?   👍 Yes    👎 No

joe verified customerOctober 2, 2015
great informational book
I am doing a ls3 in a 63 nova and needed to find out some things.this book covers just about everything.
Was this rating helpful to you?   👍 Yes    👎 No

Michael verified customerJuly 30, 2015
Awesome
Great price and awesome fast to the door delivery.
Was this rating helpful to you?   👍 Yes    👎 No

Edward Rusch verified customerAugust 13, 2014
awesome
Good information
Was this rating helpful to you?   👍 Yes    👎 No
Click here to review this product
(Reviews are subject to approval)
You May Also Like
GM LS-Series Engine: The Complete Swap Manual
$27.95
Free Shipping (US48)
Out of Stock
Close
Top
Close
Open