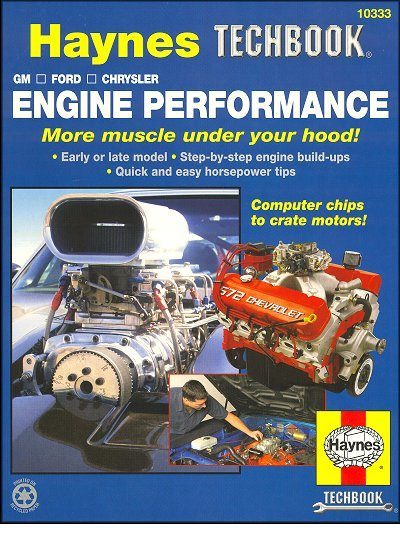 Speed Costs Money...
How Fast Do You Wanna Go?

That's how the old saying goes, but money does not grow on trees, and neither does engine performance. True engine performance is about making smart choices, and those choices will dictate how you will build your engine and how much money that performance will cost.

Do you really need (or are able to afford) a race-ready, 600 horsepower motor for your daily-driver? Probably not if you want the thing to idle properly, get good gas mileage and last at least 200k miles between overhauls. Again, the first thing to do is make the right choices.

This DIY manual by Haynes provides all the info you will need to make the right educated choices when it comes to your engine.

It will show with — words and photos — how to put more muscle under your car or truck's hood.

Early or late-model engines, they are all covered, with quick and easy horsepower tips. From computer chips to crate motors!

Ignition coils need to induce a lot more zap to light off an air/fuel ratio that significantly denser than the stock mixture. The denser mixture, the harder it is for the spark to jump the gap between the plug's electrodes.

An automotive ignition coil is a fairly simple device. It consists of two coils of insulated copper wire wound around a common iron core. One coil is referred to as the primary winding and the secondary winding.

Electrical current flowing through this conductor produces a magnetic flux that's proportional to the amount of current flow.

Any change in this current produces a change in magnetic flux that generates an electromotive force that acts to oppose this change in current.

Inductance is a measure of the amount of electromagnetic field generated by the change in current.
VALVE JOBS

The most basic of cylinder head work is a valve job, which will assure the valve seats and guides are in good condition. This is very important for an engine running at high rpm, and is essential of your engine has lots of miles.

If you're planning to install a performance camshaft with new valve springs and lightweight retainers, make sure you get a good valve job at the same time, preferably a three-angle valve job from a performance machine shop.

You won't see much performance gain from this work- it's insurance against damage on an engine that will be pushed to the limits.

In the performance valve job, the valve face and valve seat angles in the head are changed from just one angle to three or more.

In a three-angle valve job, the center angle is the one where the valve meets the seat, and the upper (70-degree) and lower (30-degree) angles are designed to smooth the flow path from the port, around the valve head, and into the combustion chamber.

That improves the flow at low-lift and is not as expensive as porting. The side view of the valve seat will have more of a transitioned slope than a stock port/seat with an abrupt angle.

Bigger changes to the cylinder heads may be detrimental to street performance. If you are planning head work, talk to the machinist first and thoroughly explain everything you've done to the engine so far, and any future mods you plan.