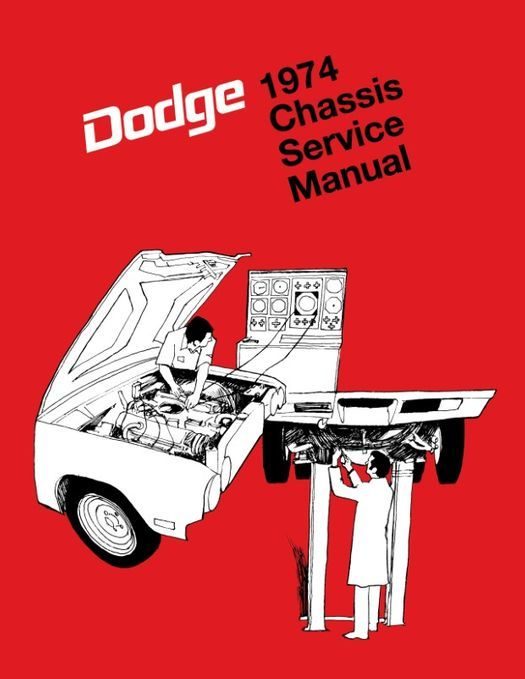 This 1974 Dodge Chassis & Body Service Manual Set is a high-quality, licensed, PRINT reproduction of the shop manual written and first published by the experts at the original equipment manufacturer (OEM), Dodge Division, for use by their dealership mechanics. When it's time to perform the maintenance and repair projects for your classic Dodge, this is the ultimate resource.

The first thing to notice is that it's a set. It contains BOTH chassis and body information. They didn't skimp either. You'll find a hefty, 1,376 pages of detailed information. From hands-on MOPAR owners to restoration shop professionals (and everyone in between) this helpful manual has the factory-correct specifications and procedures to do the jobs accurately and efficiently.

Detroit Iron is the publisher, and they've used industry-leading, digital technology combined with superior materials to create the finest manuals on the market. Don't worry. They've retained ALL of the original content, including the huge number and variety of visual aids.

You'll love the dark text, clean backgrounds and sharp visuals. Please scroll down to check out some of the excellent, black and white photographs and exploded-view diagrams featured throughout this set. You'll quickly see how the step-by-step, text instructions complement the visual tools providing unmatched clarity.

The automotive world faced a number of challenges in the 70s. From several energy crises, to the switch to unleaded gas, increased emissions requirements and much more, it's hard not to look at 1974 as the end of the original muscle car era.

Dodge soldiered on in '74 with popular models featuring variants of their legendary engine line-up. Whichever model and engine combination you have, this guide delivers the details you'll need to get and keep yours at its best.

Probably the most famous 1974 Dodge car starred in the movie "The Blues Brothers". Musicians Jake and Elwood Blues drove around in a 1974 Dodge Monaco named the Bluesmobile. It's a retired police car boasting a "cop motor" 440 cubic-inch plant.

Whether you're wrenching on a sporty Challenger or Charger, tuning up a beloved Dart or making sure your Monaco will get you to the gig, make it your mission to stay on top of your repair and service projects. When your Dodge is crying out "Gimmie Some Lovin'", you'd better do more than think about using this guide. It doesn't matter if you live in sweet home Chicago, out in sunny Los Angeles or if you're just a couple of Texas bluesmen, be prepared to take care of your vintage Dodge with this outstanding, clean and freshly printed manual. Put your car back together first...then you can see about putting the band back together.