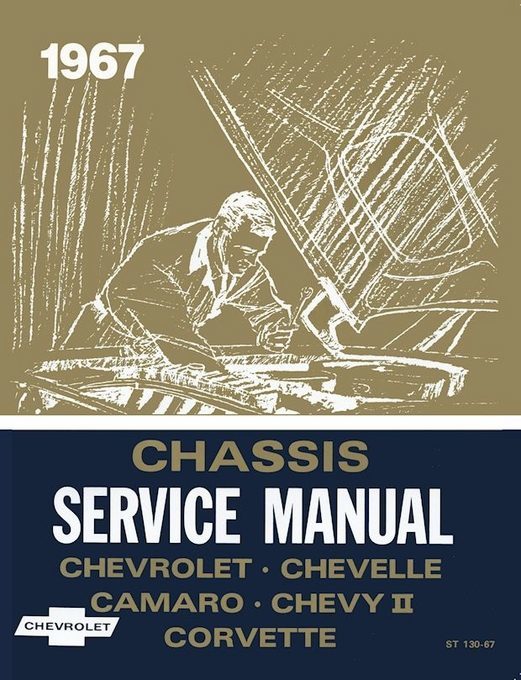 For "do it yourself" owners of a '67 Chevrolet, Chevelle, Chevy II, Corvette or Camaro, this 1967 Chevrolet chassis service manual is required reading material. It covers 1967 Chevrolet vehicles and includes many detailed illustrations, along with step-by-step instructions, which makes it invaluable for a professional restorer, amateur enthusiast or vintage Chevy mechanic. This is a high-quality reprint of the original General Motors manual which was used by mechanics at Chevrolet dealerships, and it includes their original service and maintenance operations. You'll find information such as a complete electrical section with accompanying wiring schematics. For disassembling and reassembling the vehicle's major components, there is no better guide than this one. It contains the manufacturer's own original content.

1967 was a great year for Chevrolet. Many enthusiasts consider that year's Corvette to be the high-water mark of the model. It was the last year for the Sting Ray body style which began in 1963. With stylish refinements and mechanical advancements, these classics took on the world. Big-block power was available at the check of a box. Disc brakes helped haul down these beasts, and all manner of other goodies were right there for the asking.

Having a car in your lineup as legendary as the 1967 Corvette seems like enough, but Chevrolet was holding more aces that year. A lot more. 1967 was also the debut model year of the Camaro. Chevrolet brought out their competition for the wildly popular Ford Mustang. The Camaro was more than up for the task. This handsome model was available, out of the box, with quite a variety of engines...from six cylinders to both small and big block V8s (all of which are covered in great detail in this 657 page guide). The Camaro wasn't the only legend born to Chevrolet in 1967. One of the engine options available in the Camaro was the new 350 cubic inch V8. In subsequent years, this power plant would quickly makes it way beyond the Camaro and into a tremendous number of models. It ultimately become a mainstay in the General Motors lineup for decades. If you need the specifications and instructions to get (and keep) yours rumbling down the road, be sure to pick up this detailed service and repair guide.

Of course there was much more going on than the Corvette and Camaro. Chevrolet rolled-out great cars across the board in 1967. The Impala, Chevelle and El Camino were other fine choices. Each model offered something different, but all were stylish and had well-engineered mechanical systems. All complex machines require maintenance and eventually repair. Whichever vintage model you have, you'll love owning the correct information to preserve your classic piece of automotive history.

This 1967 chassis service manual covers repairs ranging from the suspension, fuel system and brakes to more challenging projects like the engine, transmission and rear end. The book's chapters include a table of contents and special tools listing so that the less experienced mechanic knows exactly what's involved. It's the definitive source for service on these vehicles.

The Motor Bookstore is your premiere source for vehicle DIY repair manuals, service manuals, how-to guides and other publications for owners and professionals. We offer the lowest prices, fast shipping and unsurpassed customer service. Rick verified customerOctober 4, 2020
1967 Chevrolet Chassis Service Manual
Excellent value, will help a lot when working on car.
Was this rating helpful to you?   👍 Yes    👎 No