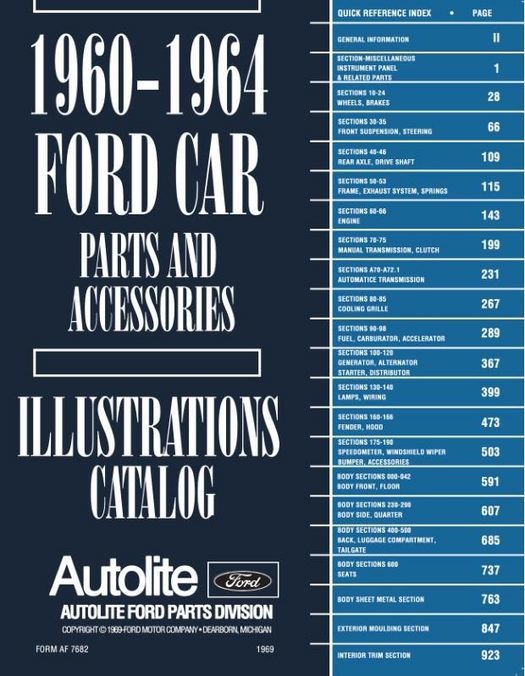 This OEM 1960 - 1964 Ford Car Parts Book / Catalog is a high quality authorized licensed reproduction of the original shop parts manual published by Ford Motor Company. This 1960 - 1964 Ford Parts book includes both the Illustrated and Text volumes; however, the Text volume has been split into two separate books so you will receive 3 shrink wrapped books. If you're looking for parts information for your 1960 - 1964 Ford automobile, THIS is the definitive guide. It checks-in at a staggering 2,224 pages, but don't worry, as mentioned, it has already been conveniently separated into three books for easier manageability.

The Text Catalog has been divided into sections, such as brakes, front suspension, engine, etc. Let's say you require information about "Link (power steering sector shaft arm to spindle connecting rod)". If you paged over to section 30 thru 46, for front suspension, steering and rear axle, you'll find it shows that part associated to Group Number 3B163. By moving to the appropriate page and checking that number it provides details such as: applicable model year(s), model, description of the part (Bolt (link to idler arm rod) - 3/8" - 24 x 1 7/8", for example), the quantity (number of them needed per vehicle) and, of course, the part number!

The Illustrations Catalog is another useful tool included in this set. You'll find a multitude of detailed diagrams with exploded views of all the components and fasteners which apply to that group. The illustrations contain arrows pointing to each item and a reference number is attached to the arrow. Some will display dotted lines to also show you how the components will attach to each other. Not only are these diagrams helpful for locating group/part information, but they are also exceptionally useful to see how the components "fit". It's like using the picture on the cover of the jigsaw puzzle box to help figure out how to put it all together. By utilizing the text and illustrations in unison, you'll be armed with quite a wealth of information.

You're sure to love all of these great illustrations, and they should make your projects easier, thanks to the vast number and quality of the diagrams included throughout this book.

Maybe you've found yourself with a restoration project which came with an assortment of parts stuffed into various boxes, bins and bags. This guide will help you to determine if they are correct for your application, exactly what they are and also assist in showing how they should be assembled and installed. If that project vehicle is missing parts, this book serves as a valuable resource for trips for decoding treasures found on trips to the salvage yards and swap meets.

This 1960 - 1964 Ford Car Parts and Accessories Catalog is perfect for the restorer or anyone working on one of these vehicles. Clear illustrations show exploded views along with part numbers, part number cross-referencing, part assembly and more. This resource is loaded with helpful information for you to identify the parts on your classic Ford. Be sure to use this new, printed and packaged version of the same guide which was prepared by the original manufacturer for their Parts Department.

Matthew verified customerMarch 24, 2021
1960-64 Ford Parts Book
The 1960-64 Ford Parts Book is a very high quality reprint. Prior to receiving the book, I was concerned that the print quality might not be as clear/legible as the original; however, it is very clear/legible and easy to read. Would definitely recommend this book to anyone that needs to look up old Ford parts.
Was this rating helpful to you?   👍 Yes    👎 No