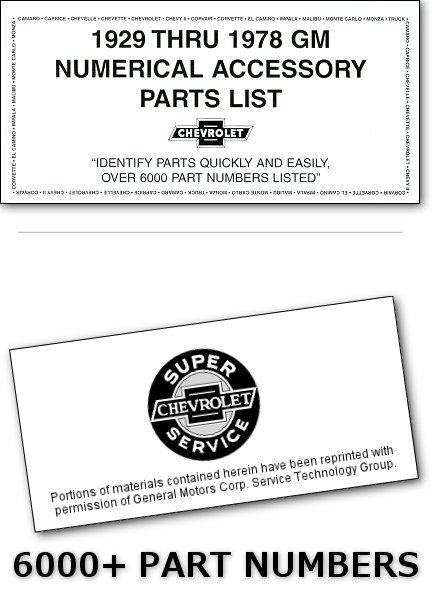 The most comprehensive Chevy parts and accessories list of its kind, covering Chevy vehicles from 1929 through 1978.

If you ever wanted, or needed a parts reference, organized numerically and cross-referenced in those cases where the same part number applies to multiple years, this is the one to have!

Over 6000 part numbers are listed, in an easy-to-use format which will allow you to locate the right information quickly and easily. We are no geniuses here at The Motor Bookstore, and yet we figured this reference out in a few minutes, so you should have no problems whatsoever!

Say you are at a swap meet and you come across a radio/tape-player combo, in mint condition, that appears to be what you need for your project 1971 Camaro. How do you know for sure if that particular unit is right for your car?

All you have to do is find the part number stamped somewhere on the radio case, whip out your copy of the 1929-1978 Chevy Numerical Accessory Parts List, and scroll down the list. There, on page 266 you will see that Part No. 994113 was indeed an AM/FM radio/tape player combo available on 1971 and 1972 Chevrolet Camaros. Bingo! You have the right part for your restoration project.

This handy guide includes part numbers for the following Chevy vehicles, from 1929 through 1978:

Truly a must-have for anyone who wants to locate (or sell) the right Chevy parts at auto swap meets.

Tom Allen verified customerJuly 25, 2018
1929-1975 GM Accessory Part Number
Very informative. Greg was a great
Was this rating helpful to you?   👍 Yes    👎 No
Click here to review this product
(Reviews are subject to approval)
You May Also Like
1929-1978 Chevrolet Numerical Accessory Parts List
$24.00
Free Shipping (US48)
In Stock
Close
Top
Close
Open