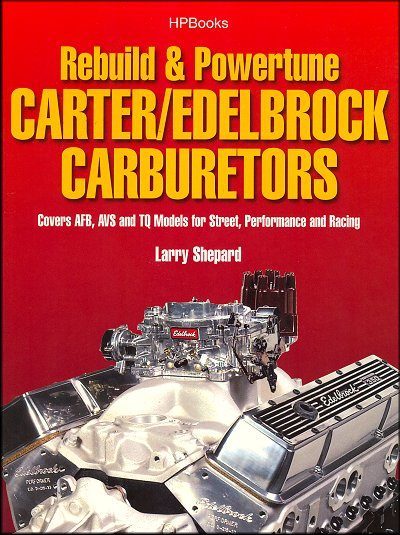 Carter carburetors have been around since the early 1900s, appearing on Chrysler, Nash, Willys, Ford, Chevy, Olds, Pontiac and other makes.

In 1952, Carter introduced the WCFB, the first American-built four-barrel carburetor, which became popular in the performance market.

In the following decades, Carter would introduce the AFB, AVS and TQ models, which were all used on OEM production vehicles, including many high-performance options and racing applications.

The company nearly faded away to obscurity until resurrected by the Edelbrock Corporation in the mid 1990s.

They began reproducing the AFB carb as the Edelbrock Performer and the AVS carb as the Thunder Series AVS carb. Edelbrock also produced parts to modify and calibrate both these carbs for almost any application.

A must have book for any do-it-yourselfer or mechanic working on one of these carburetors.