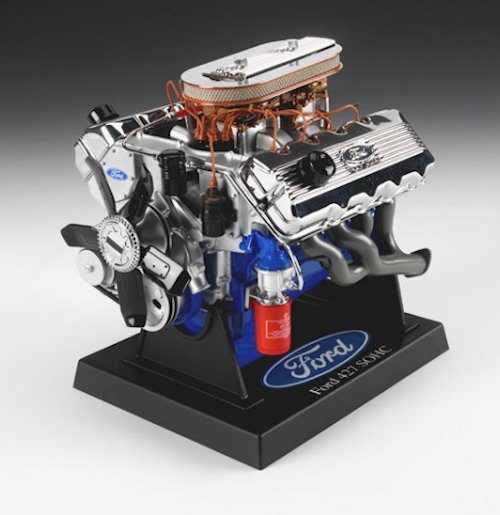 Why Buy From Us?
Item Description
- MANUFACTURER OUT OF STOCK -

The model includes actual moving parts, e.g. the Starter Motor Gear can be turned which turns the fan, pulleys, rubber belts and alternator.

This die-cast model is fully assembled - it is not a kit.

The Ford 427 Single Overhead Cam (SOHC) V8 engine, aka the "Cammer" was originally and secretly built in 1964 as a race engine. Ford released the 427 SOHC Cammer to compete with the Chrysler 426 Hemi and to maintain NASCAR dominance. Hit this Wikipedia link to read more details about the Ford 427 SOHC engine. Scroll towards the bottom of the page.

If you are looking for parts for your 427 SOHC engine, TheMotorBookstore recommends shopping at JEGS.

CHECK OUT this 427 SOHC Ford Engine Running on an Engine Stand Video - it's cool:

The following photos illustrate the size of the Ford 427 SOHC engine die-cast model as it relates to a 12 ounce can. TheMotorBookstore is proud to offer the Ford 427 engine Die-Cast to its customers! Add this awesome Die-Cast to your collection today, while supplies last.