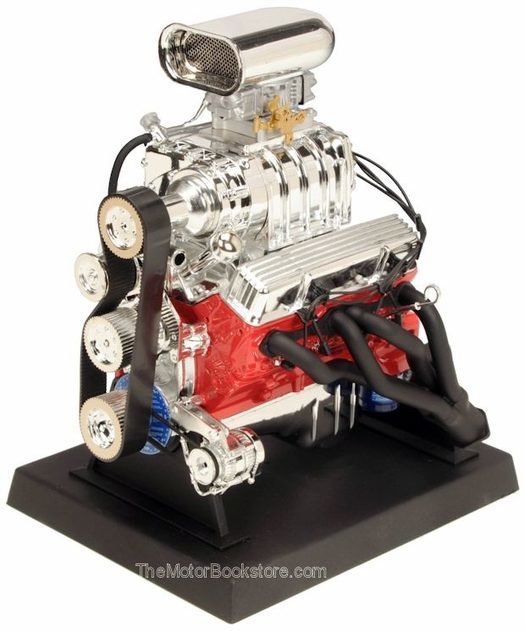 The Chevrolet Blown Hot Rod Engine is a gorgeous replica of the classic model. Highly detailed and diecast, it’s a model built to 1/6th scale with both moving and removable pieces. Every header, blower and blower belt, alternator, degree wheel and carburetor in the Chevy blown engine diecast was engineered to original specifications and promises endless fascination as you get a clear idea of how this classic machine operates with such efficiency.

The Blown Chevy Hot Rod Engine can make the toughest hot rodder weep. It’s a brilliant design, based on simple straightforward speed equipment that delivers an unbelievable hardcore performance. Introduced in many of the vehicles that came off Chevy’s assembly lines starting in 1955, more than 60 million cars, trucks and SUVs have been produced with this engine under the hood, along with a range of drag racing and circle track cars. The engine is a go-to for professional drivers as it gives up no power or performance, but was designed to be lighter and smaller than comparable V-8s.

Everyone from enthusiasts to professionals will love the Chevrolet Blown Hot Rod Engine model. They’ll get a kick out of each and every nuance set in the Chevy blown engine diecast. Carefully crafted and hand assembled, the model measures approximately 6” x 6.5” x 5” and promises to be as great fun sitting on a desk or shelf as it will be to explore.

WARNING: This Chevy blown engine diecast comes fully assembled, but has a number of removable and moving parts. It is not recommended for anyone under the age of 14.