The Tasca Ford Legacy: Win on Sunday, Sell on Monday by Bob McClurg 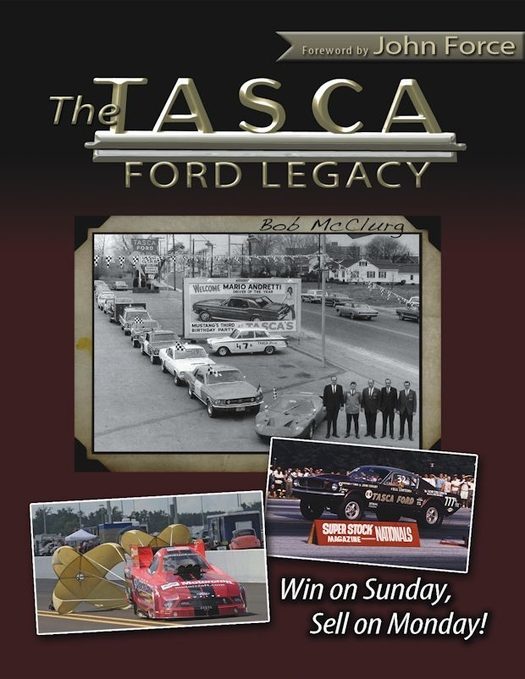 Automotive history and stunning performance cars come together in The Tasca Ford Legacy: Win on Sunday, Sell on Monday. Bob McClurg tells the story of the dealership that sparked the creation of the Cobra-Jet Mustang, that became the country's top performance Ford dealership, and took Ford cars to the next level. This book chronicles the story of the family business that put Tasca Ford performance cars in history alongside names like Chevrolet Baldwin-Motion and Spaulding Dodge.

Tasca Ford performance cars are legendary in the ranks of the muscle-cars of the mid-1900s. The Tasca Ford Legacy: Win on Sunday, Sell on Monday documents the history of the dealership from its first days, through three generations of the Tasca family, all the way to its growth into the Tasca super-dealership in Cranston, RI. Bob McClurg's wonderful photojournalism brings the story of Tasca to the very fingertips of muscle-car enthusiasts and car historians.

Contents
The Tasca Ford Legacy: Win on Sunday, Sell on Monday follows the Tasca dealership from its beginnings in 1943. The contents range from the foreword by racing legend John Force to the memorial for the dealership's founder, Robert Tasca, Sr. It contains the stories of the Tasca Ford performance cars that led to the eventual creation of the Cobra-Jet, the cramming of 428 engines into Mustangs, and even the modern version of the Cobra-Jet Super Stock in 2010. McClurg touches on every aspect of the Tasca Ford history, no matter how small.

About the Author
Bob McClurg is an automotive journalist with a string of books to his credit. His titles include: Yenko: The Man, the Machines, the Legend, Diggers, Funnies, Gassers & Altereds: Drag Racing's Golden Age, and many more, including numerous 'How-to' books. With 40 years of photojournalism in his career, he's brought an authoritative hand to the creation of this book.

Refer to the Specifications Tab above for a sample page from this book - a cool Mustang Cobra Jet.