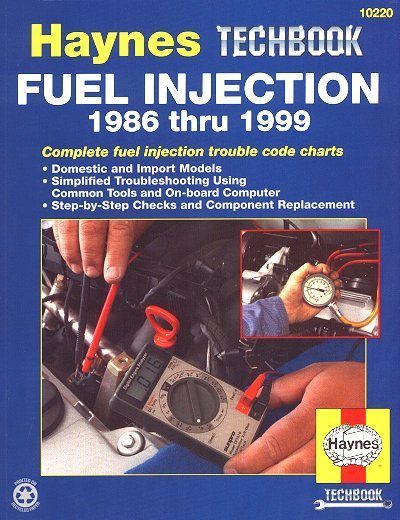 This DIY manual by Haynes, shows you how to troubleshoot your vehicle's fuel injection system using common tools and on-board diagnostics computer.

Topics covered by this manual include:

When diagnosing problems on engines controlled by computer systems, remember that many drivability symptoms and/or problems may not necessarily be caused by the computer.

The computer is only responding to the input (or change of input information) of the many sensors controlled by the fundamental systems previously discussed in this Book.

Unless all of the basic engine systems are properly functioning, the electronic controls have inaccurate information to manage the engine fuel and emissions systems properly.

Condemning a computer, input sensor or output actuator, before verifying that the fundamental systems are operating correctly usually leads to an incorrect diagnosis. Besides wasting your time, you'll find that the electronic components of engine management systems are generally expensive and usually not returnable, even if a mistake has been made in diagnosis.

Before proceeding to the electronic control system tests make the following general checks:

Note: If in doubt about the condition of any of these items, refer to the appropriate Sections of Chapter 8 and recheck the component(s) or systems in question.

On-board computer systems not only control the engine fuel, ignition and emission functions in an attempt to achieve optimum efficiency, but on most systems they also have a built-in diagnostic feature.