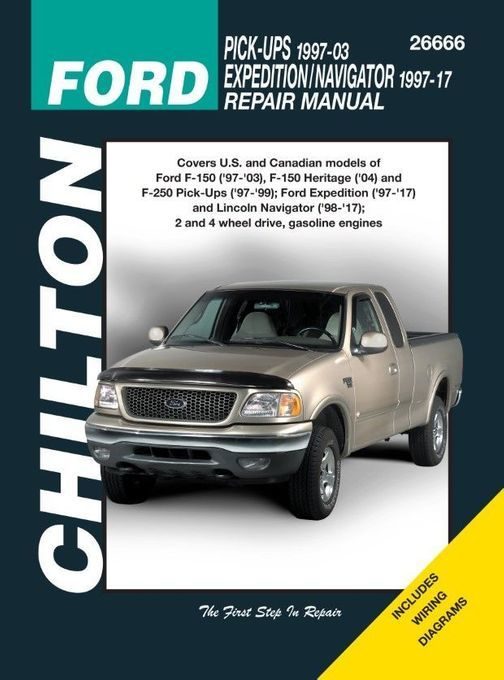 This DIY repair manual from Chilton covers US and Canadian models of Ford Pickups, Expedition and Lincoln Navigator, 1997-2017, 2WD and 4WD with gasoline engines. It's a must-have how-to guide for the do-it-yourself mechanic. All important systems are covered and the manual includes wiring diagrams! From simple service and repair to complex, this book is loaded with step-by-step instructions and visual aids to help you knock out the projects for these popular vehicles.

Note: This manual does NOT include information specific to diesel, F-250HD, Super Duty, F-350 or Lightning or other supercharged models.

The cooling system consists of a radiator and coolant reserve system, a radiator pressure cap, a thermostat, a cooling fan, and a pulley/belt-driven water pump.

The radiator cooling fan is mounted on the front of the water pump. The fan incorporates a fluid-drive fan clutch, which saves horsepower and reduces noise. When the engine is cold, the fluid in the clutch offers little resistance and allows the fan to freewheel. As the engine heats up and reaches a predetermined temperature, the fluid in the clutch thickens and drives the fan.

The recovery tank is called a "degas" bottle, and it functions somewhat differently than traditional recovery (or overflow) tanks. Designed to separate any trapped air in the coolant, it is pressurized by the radiator and has a pressure cap on top (the radiator on these models has no cap at all).

When the engine's thermostat is closed, no coolant flows in the degas bottle, but when the engine is fully warmed up, coolant flows from the top of the radiator through a small hose that enters the top of the degas bottle. There, air separates and coolant falls to the approximately one quart coolant reserve in the bottle, which is fed to the cooling system through a larger hose connected to the lower radiator hose.

Dave vest verified customerSeptember 10, 2018
Dave
I got just what I was looking for. And even the first time, no hassle. Thanks guys.
Was this rating helpful to you?   👍 Yes    👎 No

Susan verified customerMay 7, 2014
Great for young auto owners!
I ordered the Chilton manual for my 20-yr-old son, who prides himself on becoming more knowledgable about his truck, after he experienced a problem on the road and could kinda, sorta describe where the problem was, but did not know the actual, proper name of the part needing service. He loves it! Now, he describes, being able to look up the names of parts and being able to better articulate his interest and needs. I recommend getting a manual for every young, or new, auto owner.
Was this rating helpful to you?   👍 Yes    👎 No
Click here to review this product
(Reviews are subject to approval)
You May Also Like
Ford F-150, F-250, Expedition, Lincoln Navigator Repair Manual 1997-2017
$34.85
Free Shipping (US48)
Out of Stock
Close
Top
Close
Open