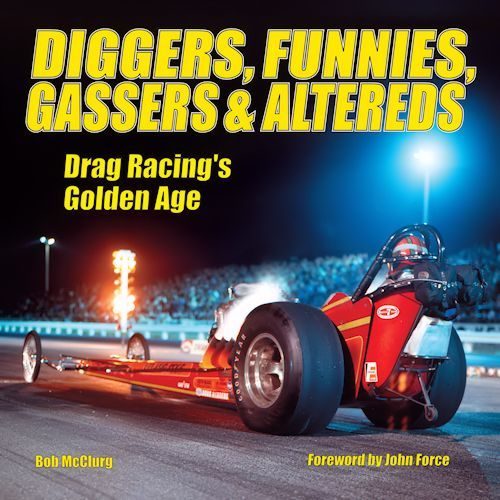 If those words get your heart, er, racing then you’re going to love Diggers, Funnies, Gassers & Altereds: Drag Racing's Golden Age. It’s a 204 page drag racing photo history that will pull you into an era when going fast ran alongside creativity and innovation. Imagine wrestling behind the wheel of a really fast car and you have an idea of what it was like. Teams were bent on a singular agenda that often included notoriety and drivers had distinctive styles that thrilled audiences. Throughout the 1960s and 1970s, when the sport was still relatively low key and unnoticed, everyone was looking to stand out!

Photographer and writer Bob McClurg was there. He was as close to the action as it gets in the heyday when the sport was as much presentation as skill. He chronicled this golden age on paper and famously with his lens. In his library were the era’s most enigmatic and popular Roaders, Top Fuelers, Pro Stock and Funny Cars, and brilliant moments with legends ‘Snake’ Prudhomme, ‘Jungle Jim’ Liberman, ‘Big John’ Mazmanian, ‘Big Daddy’ Garlits and more.

This book is both a great reminder for anyone who was there and a fantastic trip for current day lovers of the sport, a fun read for enthusiasts, mechanics, racers and any other adventurer of wheeled action. With a casual, friendly tone, Diggers, Funnies, Gassers & Altereds: Drag Racing's Golden Age walks through classes and reveals their evolutions. You see how elapsed times dropped and speed increased, how colorful presentation became more prominent and how the teams behind the wheel worked their magic.

The book opens with a foreword by John Force before diving headfirst into a thorough look at the golden years of drag racing and a fantastic photo of a Gene DeBartolo restored classic in action. From there, each chapter is a detailed study of the category of vehicle you could find on the track. The Roadster, the Altereds and Gassers, Front Engine Dragsters, Pro Stockers, Rear Engine Dragsters and (a personal favorite) the Funny Car. The drag racing photo history is accompanied by quick reads about the era, the fun and how the teams, tech and cars influenced the sport. The book closes with Drag Racing Nostalgia.

As you will see in the images, McClurg was on the front lines, often literally leaning into the engines as they roared by. With a photojournalism career that spans four decades, he has written numerous books that demonstrate his love for driving. Diggers, Funnies, Gassers & Altereds: Drag Racing's Golden Age is the penultimate drag racing photo history and promises to entertain and inform.

Refer to the Specifications Tab for another sample page from this book with a photo of a Fueler driven by "Smokey Glenn", himself.