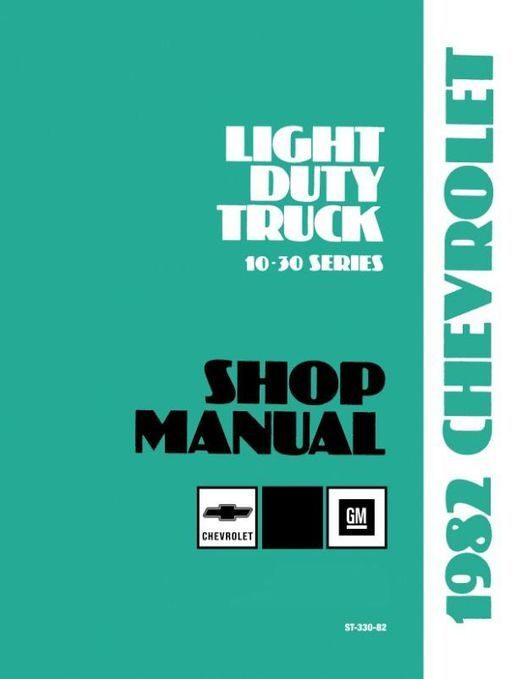 This 1982 Chevy LD Truck 10-30 Series Shop Manual is a high-quality, licensed PRINT reproduction of the shop manual written and first published by the experts at the original equipment manufacturer (OEM), Chevrolet Motor Division, for use by their dealership mechanics. When your classic square body Chevy is ready for its maintenance and repair jobs, be sure that YOU are ready too! With all of the great information included in this expert guide, you will be.

Containing over 1,400 pages of factory-composed material, this comprehensive manual is the ultimate resource for the various service projects on your ’82 Chevy truck. It’s loaded with the correct specifications, step-by-step instructions and a huge number and variety of excellent visual aids to be sure you can complete your tasks completely, accurately and efficiently. Want proof? I don’t blame you. In the old days, some reproduction repair manuals used to be a bit of a crapshoot when it came to quality. You won’t find that problem here. In fact, in some ways they’re better. The publisher, Detroit Iron, uses a heavier duty paper than the factory original. The information has been split into separate volumes for ease of use and due to this increased size. Please scroll down to find some sample pages in order to see just how well the super-sharp visual tools complement all of the well-written text. You’ll also find that the information is extremely well-organized and easy-to-follow.

In 1982 Chevrolet proudly used the slogan, “Chevy makes good things happen”. That was certainly true with their full-size line of trucks. These beloved machines are as popular now as they were when new. They feature great lines and came in a huge spectrum from pick-up to Blazer, Suburban and van. You had choices for days. From work site trucks to super luxurious town cruisers, Chevrolet had something for you for the best in work and play. If you want to keep your Chevy making good things happen, you’ll definitely want to pick up a copy of this freshly-printed and packaged reproduction manual which retains all of the content from the original source.